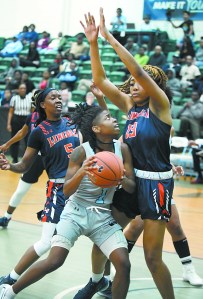 SALISBURY — A two-point quarter in a college game?

By the winning team?

Elizabeth City State (11-2, 3-1) has been one of the league’s best teams, but was perfectly inaccurate — 0-for-12 from the field — in the second quarter to fall behind Livingstone 27-16 at halftime.

The Vikings made up for that cold stretch in the second half. They scored 23 in the third quarter on 60-percent shooting to take a 39-34 lead and went on to beat the Blue Bears.

Daijah Turner scored 10 and was the only Blue Bear to reach double figures. Alexis Lake had nine rebounds.

Livingstone is scheduled to play at Claflin on Saturday, while Elizabeth City State goes to Shaw.