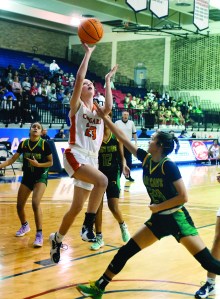 Carson’s Hannah Isley vs. North Rowan in the Christmas tournament .Photo by Wayne Hinshaw, for the Salisbury Post.

SALISBURY — Catawba’s men’s basketball team  played a stout second half, but the Indians lost 84-81 to Carson-Newman on Wednesday night at Goodman Gym.

Catawba shot 10-for-19 from 3 and made only 11 turnovers for the game, but the  difference was deadly 24-for-27 foul shooting by the Eagles.

Catawba didn’t shoot well in the first half, but the Indians shot 57 percent in the second half to make a run in the South Atlantic Conference contest.

Catawba never had the lead.

The Cougars used a big fourth quarter to take a 53-47 win.

Mary Spry had seven in the first quarter and scored 11. Makayla Johnson had seven points, while Camden Corley and Riley Isley added six each.

Salem Ward was deadly at the foul line and scored 20 for the Spartans (9-6). Alex Myers scored 14.

Carson is scheduled to return to South Piedmont Conference action on Friday at Central Cabarrus.

Davie’s boys blew out Parkland 86-56 for a Central Piedmont Conference victory on Wednesday.

Bryson Childress (North Stanly) was 5-for-9 on 3-pointers for High Point in a 66-65 loss to USC Upstate on Wednesday.

North Rowan’s home basketball games with South Stanly are off tonight, but Community School of Davidson is replacing the Bulls.

Clark was this week’s Super Senior with a score of 67.73.

Bryson Childress (North Stanly) was 5-for-9 on 3-pointers for High Point in a 66-65 loss to USC Upstate on Wednesday.