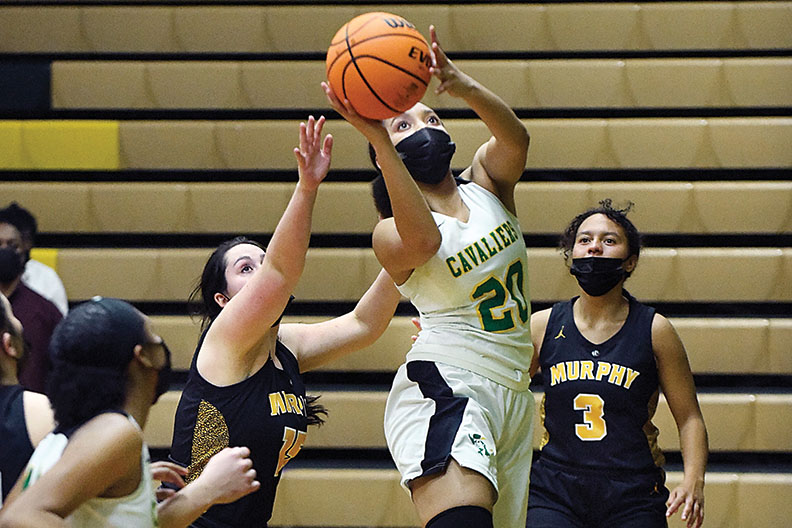 North’s Hannah Wilkerson shoots during a game against Murphy last year. Wilkerson has signed to continue her basketball career at Columbia International University. photo by Wayne Hinshaw, for the Salisbury Post

SPENCER — In the midst of fluttering gold and blue balloons and smiling teammates, friends and coaches, North Rowan senior Hannah Wilkerson quietly signed on Monday night at the school.

“So proud of her,” North head basketball coach Anthia Smith said. “To get to this day is why she’s competed so hard every day for four years.”

Wilkerson signed with Columbia International University, a small South Carolina school with a solid reputations for academics and athletics. The Rams compete well in the NAIA ranks and they also compete for National Christian College Athletic Association championships.

South Rowan’s graduate Kira Rymer starred for the Columbia International team that recently won the NCCAA volleyball national title. Wilkerson has a chance to do similar things for the CIU basketball program.

Wilkerson’s game has always been more about consistent 18-point efforts than the occasional 30-point outbursts that make headlines, but she is the leading scorer for all Rowan County players — boys and girls — by quite a lot. In a COVID world of limited games where some really good four-year varsity players are still pushing toward 1,000, Wilkerson is just four buckets away from 1,300.

“We only were able to play 12 games all last season,” Wilkerson said. “But if we can play a full season this year, I could reach 1,500 points. That’s a number I’ve looked at. That’s a goal I set for myself.”

It’s clear what 1,500 would mean to her. Quite a few girls reach 1,000, at least in normal times, but 1,500 puts you on an elite level. In the history of North Rowan, a school that opened in 1958, only three girls have reached 1,500 points, and all three went on to play Division I basketball. Sophilia Hipps (2,264 points) and Stephanie Cross (2,109) were among the great scorers not just in North history, but in Rowan County history. Megan Honeycutt is third on North’s career list with 1,555.

Wilkerson continues the pursuit of 1,500 as part of the county’s smallest roster. North dresses only seven.

The Cavaliers are able to scrimmage in practice because Smith gets in on the action and they are able to borrow a few jayvee boys.

“Hannah could have gone anywhere and played for any school, but she stayed here,” Smith said. “She’s always understood what it meant to be a Cavalier.”

Wilkerson grew up with the game and, as part of a coaching family, she can remember traveling long distances to boys AAU tournaments before she was in first grade.

She took a break from basketball for several years and explored other sports, but by the time she returned to basketball as a sixth grader, she was all-in.

“I made a decision to commit to the sport,” Wilkerson said.

She hit the ground running as a freshman in high school, scoring 20 against North Hills in her first varsity game in the fall of 2018.

“I don’t remember the first bucket I made, but I do remember that first high school game I played in was in a jamboree at Carson,” Wilkerson said. “I remember we won. That’s always the goal.”

She averaged 16.2 points as a freshman. North started that season 4-6, but finished it 16-12. Wilkerson scored 17 in a 67-63 victory against Albemarle in the Yadkin Valley Conference Tournament championship game that proved to be a turning point for the program.

COVID interrupted things not long after that, wiping out her summer plans and drastically shortening her junior season. Wilkerson scored only 176 points as a junior after topping 450 her first two seasons. She averaged 14.7 per game. She reached 1,000 points for her career in a 48-47 loss to Thomasville. North went 8-0 in YVC play. Wilkerson was named conference player of the year.

“Ordinarily that would have been a big year for recruiting, but a lot of girls in the Class of 2022 got overlooked because of COVID,” Wilkerson said. “I got a few looks, but no bites, no offers, and I was starting to doubt myself.”

But she was able to play a good schedule in the summer of 2021 and raised her stock with strong AAU showings.

“She played on a strong AAU team, played a lot of man-to-man defense and showed she could defend guards,” Smith said. “That helped her.”

Wilkerson had hoped to have a commitment in her pocket before her senior year began. It took longer than that, but it finally did happen for her. The offer from Columbia International came in November.

“I was so grateful for it,” Wilkerson said. “I know I’m one of the fortunate ones in my class.”

The offer and commitment took the pressure off her senior year.

It’s ironic that, as a senior, for the first time in her career, she’s not North’s leading scorer — sophomore Bailee Goodlett leads the Cavaliers and the county with 20.1 points per game — but that’s fine with Wilkerson, who has always encouraged younger teammates to excel.  Wilkerson is playing the best of her career. North’s team follows a nutrition plan, and she added muscle and trimmed pounds in the offseason. She’s more athletic than in the past. She’s driving harder, finishing more efficiently, defending better, shooting higher percentages from outside, while averaging 16.8 points per game for a 9-3 team.

“We’ve always asked Hannah to play a lot of positions, but she’s been able to focus on being a guard this season,” Smith said. “She’s a guard who can go out there and give us a double-double, and not many 5-foot-8 guards can do that. And she’s shooting the ball well. She made big shots when we needed them in the Christmas tournament.”

Wilkerson, who plans a sports management major, always has been a perfectionist who will return to the school from a game and head back to the gym to work on something she wasn’t happy with.

She’s been admirably consistent on the court — 69 double-figure games in 81 starts. She’s been equally consistent in the classroom where she’s maintained a 4.3 GPA that helped make her recruitable.

“When I was a freshman, West Rowan had Abigail Wilson, South Rowan had Janiya Downs, Salisbury had Bry Troutman and Carson had McKenzie Gadson,” Wilkerson said. “I looked up to those girls. I always wanted to be like those girls.”

She’s stayed with it. Now people are looking up to her.