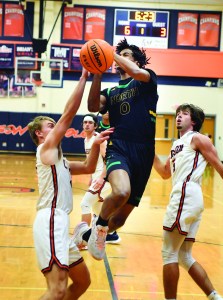 SPENCER — The North Rowan boys basketball team is officially 10-1, nothing to sneeze at, although the hoops season still hasn’t found any rhythm to speak of.

It’s been a season of stops and starts. Games have been sporadic. North didn’t play a home game between a Dec. 6 non-conference matchup with Parkland and Tuesday night’s visit by the Lexington Yellow Jackets.

“It seems like we’ve had about five re-starts,” North head coach Jason Causby said. “A rough school year. Still trying to get some continuity in our practices and our games.”

As far as the Central Carolina Conference, Lexington was North’s biggest test since the league opener at Thomasville that did not go well for the Cavaliers.

But North answered the bell this time, pulling out a defensive-minded 57-52 victory. Quashawn Carpenter went 9-for-10 from the foul line and scored 19 points.

“It was really important to hold serve and get this one at home against one of the really good teams in the league,” Causby said. “I’d say it was a pretty typical CCC matchup. Ugly at times, but really exciting at others.”

North generally had the upper hand in the first half, but Lexington guard Javien Reid scored 19 of his 27 points prior to the break. North let Lexington (9-5, 2-2) get an easy one at the end of the half, and the Cavaliers settled for a 34-30 lead as they headed to the locker room.

A serious scoring drought, a long spell of stagnant offense in the third quarter, got North in trouble. The Cavaliers put up just five points in that quarter, slid behind and still trailed the visitors by seven with five minutes left in the game.

“We were getting very close to desperation mode, realizing as a coaching staff we were going to have to change things up, but then we started digging in defensively and getting consistent stops,” Causby said. “I don’t know that we ever stopped Reid, he’s really good, but we did corral him and slow him down a little. We cut it from seven to three, and then the pressure was on them a little bit.”

North got the tying bucket on a wraparound pass from Quashawn Carpenter, who drew multiple defenders before dishing to Derrick Hanson for a big, two-handed finish. Then Carpenter scored the go-ahead bucket.

North had a depth advantage, got points from nine players, and maintained the momentum the rest of the way.

Hanson scored 12 for the Cavaliers, who have won five in a row.

North plans to play South Stanly in a non-conference matchup on Thursday.

North will take a 4-1 CCC record into a Saturday afternoon game at Salisbury that is expected to tip around 1:30 p.m.

Salisbury and Thomasville are 3-0 in the league.