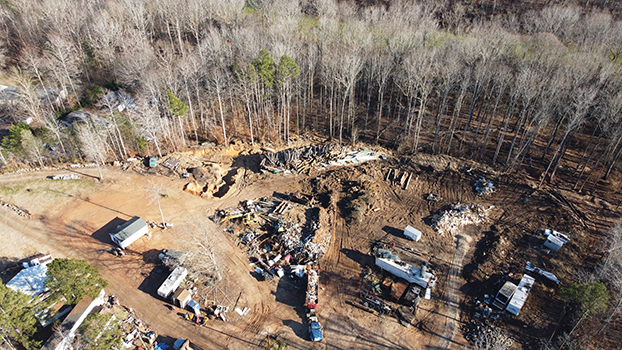 An aerial shot of the site at Dawson Downs Lane that is being investigated by the NCDEQ. Photo submitted.

MOORESVILLE — The owners of a dump site in southwest Rowan County have been slapped with more than $40,000 in fines and are facing legal action after failing to comply with state environmental laws.

For more than a decade, Roy and Tonya Sykes have been the subject of scrutiny from the North Carolina Department of Environmental Quality, county officials and nearby neighbors for operating a landfilling operation under the business name Renee’s Demolition at 340 Dawson Downs Lane. The entrance to the site is located in a cul-de-sac at the end of a residential road dotted with houses.

The Sykes purchased the site on June 15, 2012, but they were previously leasing it. Roy Sykes told the Post in April he began to dispose of brush, stumps and some debris from demolished homes nearly two decades ago. Renee’s Demolition has been operating without a permit or authorization from the NCDEQ, which regulates landfills across the state. Renee’s Demolition is not registered as a business with the Secretary of State’s office, according to court documents.

The NCDEQ initially investigated the site in 2004 after receiving complaints and subsequently issued a Notice of Violation for open burning. A follow-up investigation into open burning complaints occurred in 2008, 2016 and 2018 resulting in fines totaling $3,739. On April 28, the NCDEQ Division of Air Quality issued a $10,761 fine for continued open burning at the site.

The NCDEQ’s Division of Waste Management became involved with regulating the site in 2011 after receiving complaints about waste being brought to the property and being buried or burned. During an inspection of the site, the Division of Waste Management found construction and demolition waste, including plywood, lumber, painted wood, vinyl siding and shingles. There was also evidence waste had been buried at the site.

The Division of Waste Management issued a Notice of Violation after that visit and issued subsequent letters for the illegal disposal of solid wastes at the site in 2015 and 2016. When representatives from the DEQ visited the site again in 2017, 2018, 2019 and 2020, evidence of discarded materials was noted. The pile of debris and disturbed land continued to grow in size.

In May, the NCDEQ Division of Waste Management issued a compliance order with an administrative penalty of $31,800, the heftiest fine issued to date. None of the fines imposed thus far on the site have been paid, according to a NCDEQ spokesperson.

Not only did the NCDEQ levy heavy fines last year, but issues at the site were also referred to the environmental section of Attorney General Joshua Stein’s office. The office filed a complaint and motion for injunctive relief in Rowan County Superior Court on July 29.

“This is an action to abate defendant’s continued dumping and burning of solid waste in violation of North Carolina’s Solid Waste Management Act, Air Pollution Control Laws and related regulations at property owned by defendants and located at 340 Dawson Downs Lane,” the legal filing states. “By this action, the state of North Carolina seeks to remedy defendants’ continued violations and abate the environmental and health risks presented by the continued violations.”

If the motion is granted, Roy and Tonya Sykes would be forced to immediately and permanently cease disposal of solid waste on the site and cease burning on the site. Gates, berms or fences and posted signs would be placed at the site indicating it is closed and no dumping is allowed. Roy and Tonya would also need to contact a representative from the NCDEQ and discuss a cleanup operation. Within 90 days of that discussion, all solid waste from the site, including what may be buried, would have to be properly disposed of at a permitted solid waste facility at the owner’s expense.

Once all of the solid waste is removed, the motion would require the defendant to work with Environmental Compliance to determine if any sampling of soil, groundwater or surface water is required. If it is required, it must be done within 30 days at the owner’s expense.

Despite the number of fines and pending legislation, dumping and other landfill actions have persisted as recently as late December.