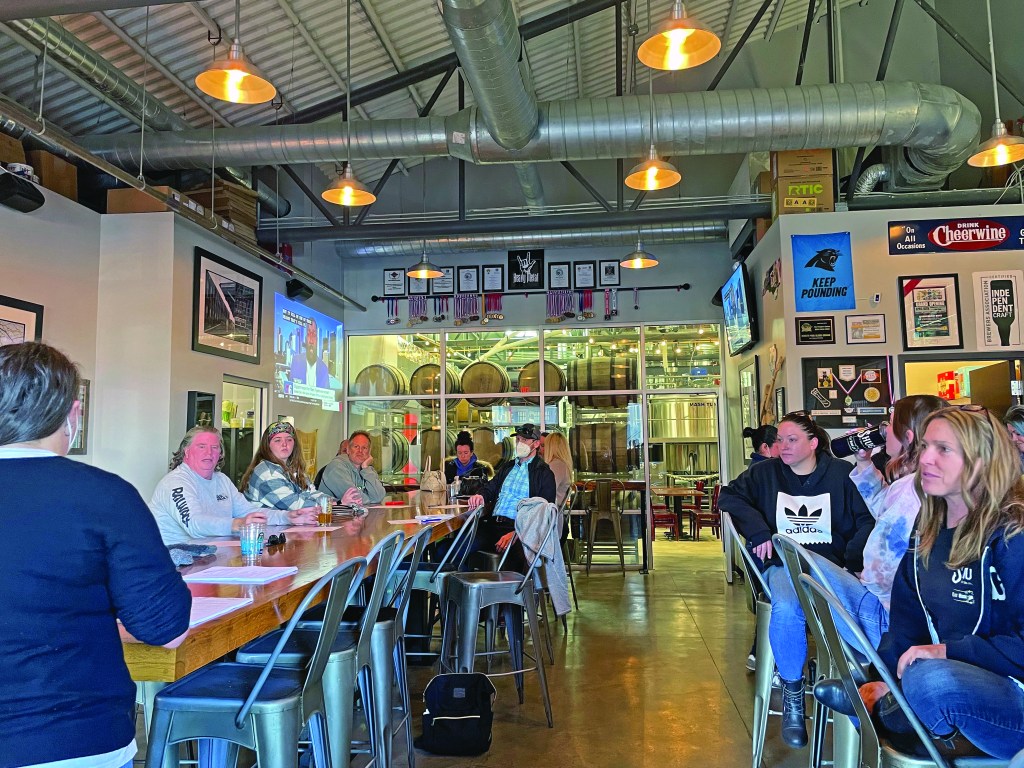 SALISBURY — Downtown bar and restaurant owners still reeling from the economic effects of the pandemic say they see the potential for a downtown social district to lift all ships on a rising tide.

A social district would allow consumers to purchase alcohol from state-licensed businesses and restaurants and walk around the designated district with specially marked cups. The ability for municipalities to implement such a district comes from legislation passed in the General Assembly during last year’s legislative session, House Bill 890.

Downtown Salisbury Inc., which is working to establish the district, met with downtown bar and restaurant owners Tuesday to discuss the proposal they plan to bring forward to City Council next month. DSI Board of Directors member Samantha Haspel told the Post DSI has already discussed this idea with downtown merchants. So, Tuesday’s discussion primarily included logistical questions about implementation.

“Anything we can do to generate more tourist traffic into our town is good for all of us,” Marshall said. “All ships rise with the rising tide. So if we can come together and put together something like this that allows people to make this little town a destination, I think we’re really doing something different in town and for businesses.”

New Sarum Brewing co-owner and brewmaster Andy Maben said he and others have spent the previous few years educating the public about how craft beer is a social treat and not something that’s mass consumed. Maben said a social district would provide another venue to teach about the brewery’s products and “what community-driven brewing is all about.” Additionally, he sees it as an opportunity to build synergy among downtown bar and restaurant workers.

“There’s a weird misconception among people that have never been in the restaurant or service industry that everybody is against each other, but actually, we all work together as much as we possibly can to get as many people down in our area and spread the wealth,” Maben said. “If we can keep money in downtown Salisbury, then all of us keep paying our employees.”

Go Burrito owner Mikey Wetzel told the Post he sees the district as an opportunity to attract young people who may otherwise take their dollars to Kannapolis or Charlotte. Shortly after the law allowing social districts was passed last fall, Kannapolis established its own social district in October.

Wetzel added that ABC licenses include the boundaries of where alcohol can be consumed at a business, so this would prevent the need to apply for extensions and, instead, allow for pop-ups further from businesses during city events like Salisbury Pride, for example.

“When I’m a business and I’m advertising for you to come to my place or come to my live music, my biggest challenge is getting you to leave your house,” Wetzel said. “Once you get in the car, your dining choices got really big. Because if you’re 10 minutes from downtown, you’re not far from Kannapolis … So anything that you do to make downtown Salisbury cool, is going to be like a magnet for all the people to spend their money here.”

Wetzel added that, with a growth in residents downtown, people also want the amenities and perks that usually come with living in a downtown area.

At this time, DSI plans to propose including the entirety of the municipal services district — the area officially designated as being downtown — but members of the City Council can choose to scale back and start small. The municipal services district includes areas along North Jackson, East Cemetery, West Horah and North Long streets, along with parts of South Main, South Church, East Kerr, East Council and North Lee streets.

Days and hours of operation have not yet been determined. Wetzel expressed concerns for some confusion among customers about downtown businesses’ operating hours, which he said already is a challenge to communicate. Haspel said the idea discussed among task force members is allowing the district to match when businesses begin and stop serving alcohol.

While Bell Tower Green Park is part of the MSD, DSI will propose beginning the eligible drinking time there later than surrounding businesses to accommodate families visiting the park during the day, Haspel said.

Shannon Bergland, owner of Bottle & Can, said in addition to more enjoyment of craft beer, the district will allow her to put a bench outside of her small business for patrons to sit, which is a challenge she’s faced because such an endeavor requires extending her permit and a hefty cost. Bergland added that she and other merchants are focusing on “building back up” from the pandemic.

“That saves me around probably close to $3,000 a year, not on top of all the extra money I’ll make from people (in the district),” Bergland said. “That alone is great for me because people always ask me about outdoor seating, and especially right now with COVID, it’s not an expense that I can budget for.”

Other points of discussion included whether it’s best to use a sharpie marker on the cup or ensuring a patron’s name is part of a label on the cup. Bar owners also asked about chipping in for a bulk purchase of cups to eliminate the burden across merchants. Haspel and merchants also discussed implementing a few cents of surcharge to put toward initiatives that discourage alcohol and substance use among youth in addition to the purchase of cups.

Additionally, special cups with the logo of the social district, name of business or restaurant that provided the alcohol and a statement discouraging underage drinking are required. The cups couldn’t exceed 16 ounces of alcohol and patrons couldn’t enter a new participating business with alcohol still in the cup. Drinks must be disposed before leaving the district.

DSI will also request the city provide businesses with district stickers for the cups and for the front door of their businesses indicating they’re a participant in the social district. The name of the customer, along with time and date of purchase will be required. Cups must comply with the city’s recycling standards, and garbage cans would need to be available to dispose of the cups when visiting another establishment.

If approved, Haspel anticipates DSI could implement the idea it in March or April, though that is also subject to City Council’s discretion.