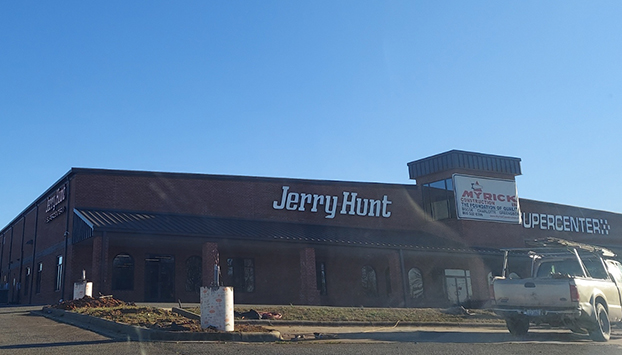 The former site of a Tilley Harley-Davidson dealership is set to become a Jerry Hunt Supercenter. The business, which has a location in Lexington, sells used cars.

The former Salisbury location of Tilley Harley-Davidson on Bendix Drive is trading one type of vehicle sales for another.

The location, adjacent to Interstate 85 and near Faith Road, is being converted into a Jerry Hunt Supercenter. The auto dealership, which sells used cars, also has a location in Lexington.

City of Salisbury Development Services Manager Teresa Barringer said the department has reviewed plans to renovate the facility for the used car dealership. Signage for the dealership has already been added to the facility as well as a notice that it will be open this winter.

Tilley Harley-Davidson’s Salisbury location first announced its permanent closure in April 2020, saying it would move all operations to Statesville. The motorcycle dealer came to Salisbury in 1998 as a “secondary retail location” on Innes Street for seven years before moving to the former site on Bendix Drive.

What is gain-of-function research? Is it conducted in NC?

A reader asked for the definition of the gain-of-function research method and where the research is being performed in North Carolina.

The method involves manipulating genetics of an organism to enhance or change its properties. The research is controversial. The National Institutes of Health cites concerns that certain gain-of-function studies have raised safety concerns because they have the potential to enhance “potential pandemic pathogens.”

The research has been the subject of controversy, including the United States’ changing role in spending federal dollars on the research during the past decade. There’s widespread speculation that gain-of-function research at a lab in Wuhan, China, sparked the initial COVID-19 outbreak.

There is no repository of current experiments being performed, but North Carolina has drawn attention for gain-of-function research before.

In 2015, the University of North Carolina at Chapel Hill created a viral chimera by modifying a coronavirus that caused severe acute respiratory syndrome. An article in the scientific journal Nature describes the study as beginning before the federal government placed a moratorium on gain-of-function research, and the National Institutes of Health allowed the research to continue.

In 2020, ProPublica reported there were several incidents in 2015 at UNC where researchers were potentially exposed to lab-created coronaviruses made in a high-security biosafety lab.

The N.C. State University College of Veterinary Medicine has a biocontainment facility at the same security level.

A reader cited seeing people make sudden moves to merge with traffic after the northbound on-ramp for Interstate 85 at exit 76. That’s the interstate exit with Innes Street.

In response to the Post bringing the issue to his attention, Seitz said crews will reach out to a contractor about installing temporary signage.