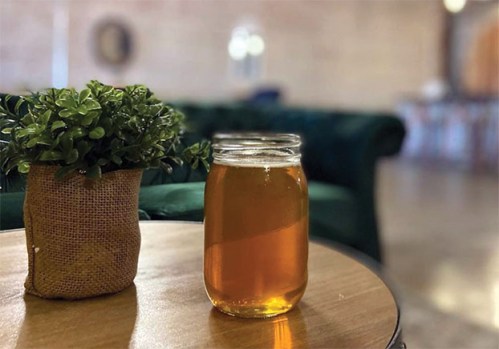 Tipsy Hare Ciderworks serves up a number of ciders right next to Old Armor Beer Company. It's also right above Kingpin Bowling, a small four-lane alley that offers a faster-paced version of the sport. Photo submitted. 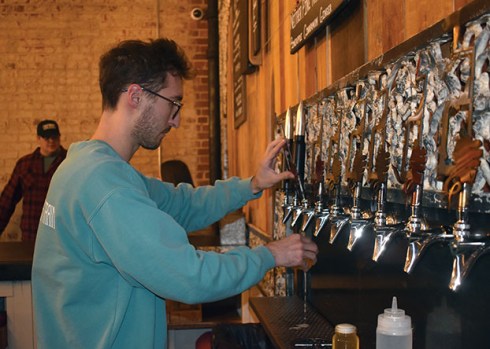 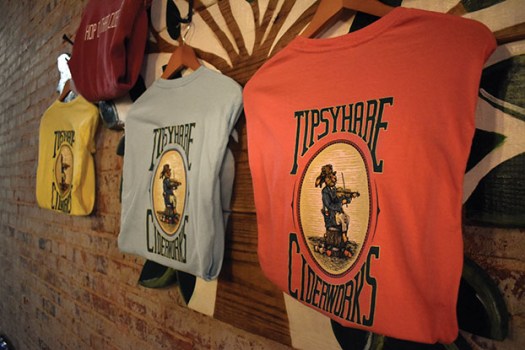 Tipsy Hare might be connected to Old Armor, but the cidery's branding and atmosphere is completely distinctive. Ben Stansell/Salisbury Post 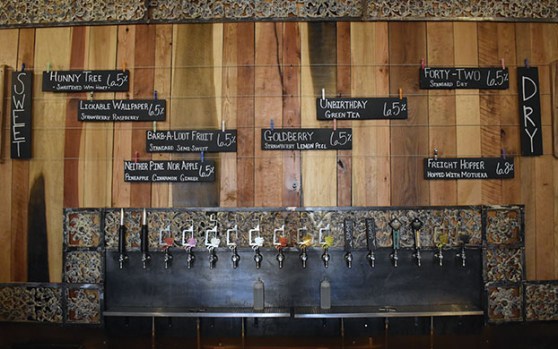 The ciders on tap at Tipsy Hare range in flavor from sweet to dry and come in a variety of flavors. Ben Stansell/Salisbury Post

KANNAPOLIS — There’s something new brewing next to Old Armor Beer Company. And it isn’t ale.

After mastering the beer-making process, the owners of Old Armor have turned their attention to cider. Kyle Lingafelt and Stefan Perrine are on the brink of officially opening Tipsy Hare Ciderworks at 211 West Ave. The new cidery is connected to the duo’s corner brewery, allowing patrons to fluidly move from Old Armor to Tipsy Hare through an internal door.

The idea for Tipsy Hare came when Lingafelt and Perrine were considering what to do with the space beside their brewery. Seeing how popular the hard cider they carried at Old Armor was with customers, it seemed like a no-brainer.

“We had the space next door to expand, but what’s the right way to expand?” Lingafelt said. “Looking at it we said, ‘Well, why don’t we do cider?’ There’s no cideries in Cabarrus County. There are one or two in Mecklenburg County. It wasn’t here. It was a need/want for the area, it looked like.”

Although it accounts for just a fraction of the total alcohol market, hard cider has been gaining popularity over the past several years. The fermented apple-based beverage is not only sold by large companies like Angry Orchard or Woodchuck, but it also starting to give rise to local cideries across the country.

By opening the cidery, Lingafelt and Perrine are adding more options for non-beer drinkers who still want a buzz. Tipsy Hare also gives customers a chance to enjoy a different atmosphere.

“It’s a little bit more chill, a little quieter and more relaxed,” Lingafelt said. “There are couches, chairs. It’s a whole different look and feel. We definitely took a different spin to that than we did the brewery.”

Before the duo started getting serious about opening Tipsy Hare, they first had to prove they could make good cider. The cider-making process itself isn’t that different from brewing, Lingafelt said, except there are a fewer steps and it’s not as forgiving.

The process starts with pasteurization of the apple juice to boil away any harmful bacteria. The liquid is then placed in fermentation tanks. Yeast is added and time gets its chance to work. Lingafelt and Perrine might add water to cut down the alcohol by volume content and make the cider “more approachable.” To bring different flavors to ciders, they add in different ingredients such as honey or fruit.

Lingafelt and Perrine made their first batches of cider at home and taste-tested it with help from their friends. Lingafelt said they found success right away, a testament to their studying and extensive brewing experience.

“We fortunately haven’t had a bad batch yet,” Lingafelt said. “I think that’s due to us doing our research, talking to people who make it and making sure we had our homework done. Asking all the questions up front.”

The cider itself is now made at Tipsy Hare Ciderworks.

The cidery will officially hold its grand opening on Jan. 22, with live music, a ribbon cutting and some raffles. Lingafelt said almost a dozen ciders will be on tap and ready to go. The flavor profiles range from the extra sweet “Honey Tree” to the dry “Free Hopper,” with variety in the middle. The plan is to keep adding and experimenting with flavors as time goes on, like they have with the beer at Old Armor.

Even though Tipsy Hare’s grand opening is a few weeks away, the cidery has been open a few days each week since the start of December. Lingafelt said he’s pleased with the reception, especially since they haven’t done any marketing yet.

“We just opened the door and the place was packed,” Lingafelt said. “I guess the word got out.”

There’s more to Tipsy Hare below the surface. Underneath is Kingpin Bowling, an intimate four-lane alley that uses duckpin bowling rules and equipment. Duckpin bowling is a variation of traditional bowling that uses smaller pins attached with strings. The bowling balls are about the size of a shot put ball, can be held with one hand and lack finger holes. The lanes are 35 feet long as opposed to the normal 60 feet. The game is faster paced and lends itself to groups of people.

“With kingpin, we wanted something for family and friends to do together,” Lingafelt said.

People can bring their cider or Old Armor beer down to Kingpin, but there’s also a bar stationed in the alley.

“It’s become a little compound of things to do,” Lingafelt said.

More information about Tipsy Hare Ciderworks can be found on its Instagram page or online at thciderworks.com.