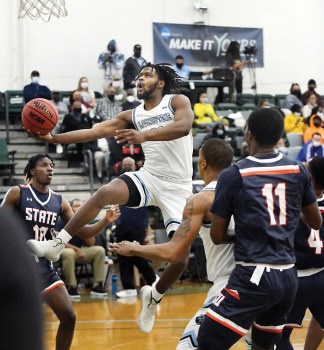 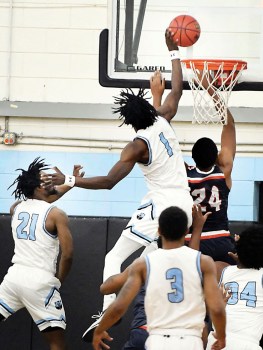 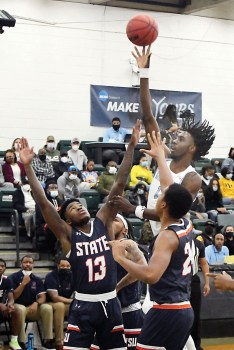 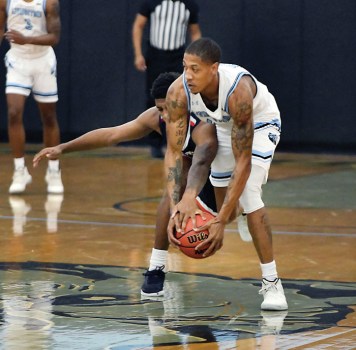 The former Catawba regular has found a comfortable home in the CIAA at Virginia State, the squad he led to a 68-65 men’s basketball victory over host Livingstone. His 28 points topped all scorers and capped a pleasant return to Salisbury, but don’t hand him the league’s Player-of-the-Week award just yet.

“You know, it’s not just me. It’s all these guys,” Hunter-Whitfield said after shooting 8-for-17 from the field and draining three 3-pointers. “It’s been a rough (holiday) break. We’ve had all these guys out with COVID, but I’m glad we got this one, this team win.”

Virginia State (5-7, 2-3) got it by erasing a 10-point second-half deficit and slowing down the high-scoring Blue Bears (4-4, 1-2). Hunter-Whitfield, a 6-foot-5 junior who scored 31 points in VSU’s  loss Thursday night at Winston-Salem State, snapped a 65-65 deadlock when he sank three free throws with 6.1 seconds to play.

“It did get away from us,” said 15th-year Livingstone coach James Stinson. “But they did a good job of executing in half court. We really tried to speed them up and use our depth, but I think we started to slow down ourselves. That and we shot a miserable, 3-of-21 from the 3’s. That’s not us. Everything for us is driving, kicking out and getting turnovers.”

Livingstone was paced by senior Navar Elmore, the 6-9 forward who shot 8-for-10 from the floor and led the Blue Bears with 19 points. He also blocked four shots and matched Nasir Austin’s school record of 145 career rejections.

“I just love stopping people from scoring,” he smiled outside the subdued LC locker room. “I never want them to score.”

Livingstone had averaged a conference-best 80.3 points-per-game through its first seven contests, thanks largely to its 48.8 shooting percentage. But against the Trojans, Livingstone converted only 41.8 percent from the floor. The Blue Bears still managed to stretch a 32-29 halftime lead to 51-41 when Elmore drove the left baseline and scored on a nifty, over-and-under move with 11:48 remaining.

“They’ve got some pretty good shooters on their team,” said winning coach Lonnie Blow Jr. “And they made a few shots in the first half. They didn’t make any 3’s (0-for-8), but second half they started making some of those and some mid-range jumpers. That got them up a little bit, but it didn’t worry us too much.”

The Blue Bears opened the second half with a 9-4 scoring spree that featured a dramatic, right-side floater by Deshone Hicks as the shot-clock expired. Moments later, Elmore flushed down a tomahawk jam off a well-placed alley-oop pass from Hicks.

“We had a rhythm going,” said Elmore, who also grabbed six rebounds. “But I think when we went up 10 we got a little lackadaisical. We needed to stay in front, stay spaced from their defenders, but we didn’t.”

Virginia State’s counterpunch began when Hunter-Whitfield stuck a 3-ball from the right pocket and teammate B.J. Fitzgerald — the CIAA’s third-leading scorer — completed a three-point play with 9:26 to play. Seven minutes later Fitzgerald’s rebound and stick-back put the guests ahead 64-58. After going nearly four minutes without a field goal, the Blue Bears netted three in the final 1:40, including a full-court dribble drive for a layup by Arion Broadnax that tied the score with 35 seconds left.

“It might not have looked like us tonight, but it is who we are,” Stinson said. “That doesn’t signify that we can’t (be a potent offense). It just says tonight we didn’t get it up and down the floor.”

The game’s decisive sequence began with about 10 seconds on the clock. VSU guard Michael Melvin stumbled on a hard drive down the lane, but alertly passed the ball to Hunter-Whitfield, who was positioned on the left side beyond the 3-point arc. He launched the game’s final shot, was hacked by Broadnax and stepped to the line. Three free throws later, the Trojans had enough to earn their 11th win over LC in the team’s last 12 meetings.

“When we got the lead, we stopped executing,” Elmore said. “That was a key. We could have won this one. We should have.”

NOTES: Fitzgerald (19 points, 8 rebounds) entered the game averaging 17.1 points-per-game. Hunter-Whitfield snagged nine rebounds and drew 11 fouls. … VSU finished 23-for-52 (44.2 percent) and converted 18 of 30 free throws. The Blue Bears went 28-for-67 from the floor and 6-for-9 from the line. … Elmore leads the conference with a 69.4 shooting percentage (59-for-85). … Livingstone hosts Shaw University on Monday night.