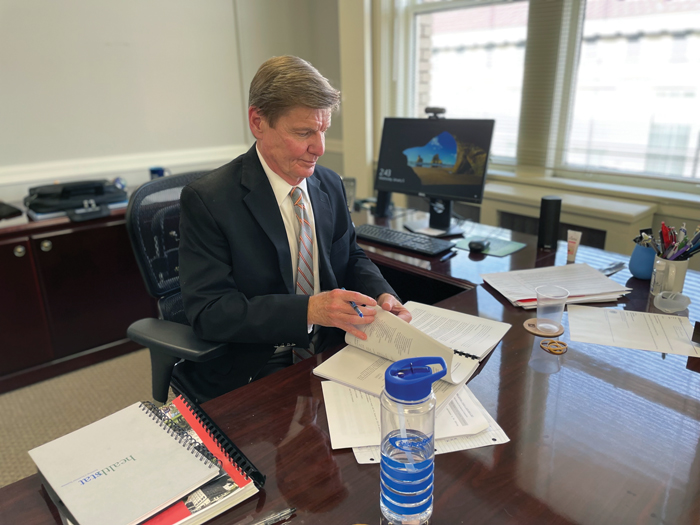 Interim City Manager Brian Hiatt began his role with the city on Jan. 3 after the departure of Lane Bailey, who had served the city since 2015. Natalie Anderson/Salisbury Post file photo

SALISBURY — Interim City Manager Brian Hiatt says every manager has their own leadership style. For his short stint in Salisbury, his goal is to keep things moving forward.

Hiatt, 64, grew up north of Thomasville in Davidson County. He received a bachelor’s degree in history and government from Appalachian State University and a master’s in public administration from UNC-Chapel Hill. He spent a few years in Guilford County before 14 years as personnel director and then assistant city manager in Hickory. In 1998, he was hired to be the city manager of Concord, where he remained for more than 20 years before retiring in 2018.

Shortly after his retirement, the city of Salisbury named Hiatt its interim planning director in 2018 until Hannah Jacobson was selected in April 2019.

Hiatt said he’s known former City Manager Lane Bailey for a long time. Hiatt considered several factors before deciding to take on the interim role, but ultimately he enjoyed his brief time spent in Salisbury and grew to like the people he worked with and met. He said while it’s well-known across the state that Salisbury takes pride in its downtown and history; it’s also seen substantial growth since his time with the city just a few years ago.

Hiatt anticipates Salisbury will soon face some of the same challenges he worked to resolve during his time in Concord. Chief among them is preparing for, and subsequently taming, residential and commercial growth. He recalls residential growth picking up in Concord when he began, and the city was also working to build up its retail base.

Preparing for growth involves establishing high-quality development standards that attract opportunities, which Hiatt said he sees happening now within Salisbury’s Planning Department. Additionally, Hiatt said the ability to cooperate and work with other governmental leaders in the community is essential at managing the challenges associated with more growth, such as balancing economic developments and increased population with adequate schools, for example.

“Trying to manage growth and coordinate among all the different jurisdictions to make sure that it is smart growth and growth that doesn’t negatively impact the current citizens,” Hiatt said.

The city’s fiscal year budget must be adopted no later than June 30. So, Hiatt said budget preparations are currently underway. The city is working toward hiring the new manager before the budget must be adopted so the new hire can be involved and make any necessary tweaks without just inheriting it, he said.

An audit of the city’s 2020-21 budget showed a surplus of nearly $3 million due to better-than-expected sales tax and property tax collections. Hiatt said it will be important to ensure money is set aside to implement findings from an ongoing citywide pay study, though not all recommended pay raises may be implemented July 1. Overall, he’s optimistic but cautious, especially since salaries must be covered year-to-year and not with one-time funding or excess revenue.

He’s optimistic, however, that the city has more opportunities than ever to seek grants to fund various projects because of the COVID-19 pandemic. Additionally, the city has around $6 million in American Rescue Plan funding to spend, but plans have not yet been discussed.

Hiatt said every manager has their own style, but he’s not interested, as interim, in becoming “a change agent.” He’s learned over the years that it’s best to listen, and he often begins talking more once he’s learned more about the atmosphere and others’ personalities. He also believes thriving organizations continue to change and improve incrementally rather than major changes at once. As interim manager only expected to serve a few months, he channels that same philosophy for this role.

“I think the difference is that the interim manager is your job is more to keep the car in the road, keep it moving forward,” Hiatt said.

Bailey’s last day was Dec. 31, and he told the Post his last days involved reflection on how blessed he has been throughout his career and the “wonderful people” he’s worked with over the years.

Bailey hopes to be more involved in his church, First Baptist. He wants to “stay out of the way” of city operations, but he’s also only a phone call away, he said. He’s already started a part-time gig as executive director of the North Carolina Association of Regional Councils of Government, where he’ll coordinate activities among leaders, board chairs and various state agencies. He’ll also soon be working with a firm that recruits city and county managers, which may involve some travel.

Bailey said he’s always joked that when he hit his 30-year mark, he’d look for opportunities in other states. That was before Salisbury became home. Retirement in Salisbury made sense, he said, and “the timing was right.” It was time for a new energy level, he added.

“My family and I are staying here,” Bailey said. “This has become home. This is a wonderful place to live.”

Hiatt was hired with the recommendation of Hartwell Wright, a human resources consultant with the North Carolina League of Municipalities who the city authorized to provide an external candidate from the pool of retirees across North Carolina.

Hiatt and his wife, Julie, live in Concord and have two adult children. He enjoys the ability to take on this role while still getting to “sleep in my own bed.”