‘Exercise my ideas’: Mike Ploplis turns in his wings to live artist dream 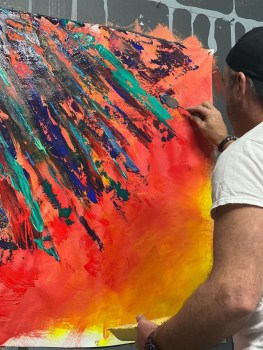 Submitted photo - Mike Ploplis working in the studio. Ploplis has had a lifelong interest in art and started his career as an artist working for a weekly newspaper. 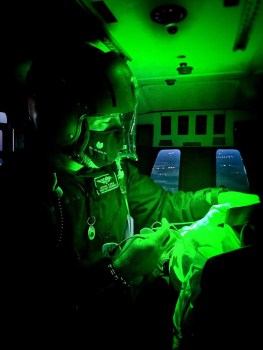 Submitted photo - Ploplis working in the back of a helicopter. He spent more than 3 years as flight paramedic and about 30 in the field total. 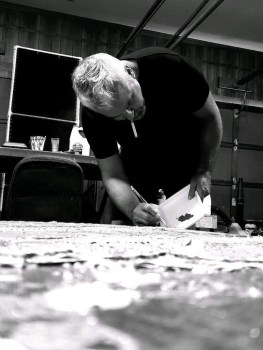 Submitted photo - Ploplis went full time as an artist in November, hanging up his paramedicine career to pursue a longtime dream. 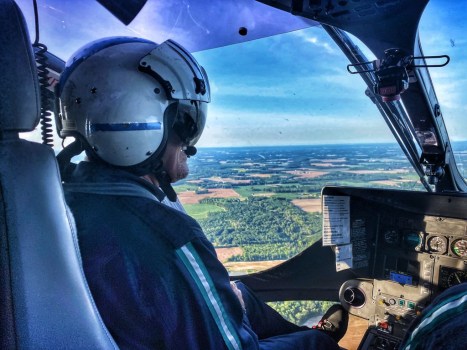 Submitted photo - Mike Ploplis in the cockpit during a flight. 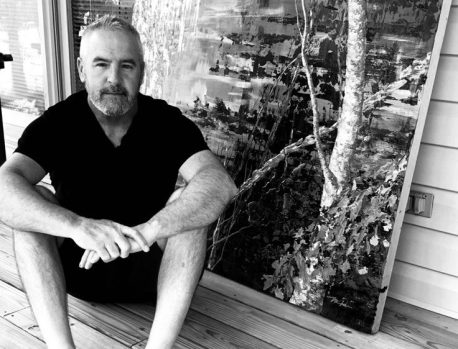 Submitted photo - Mike Ploplis sitting with one of his pieces. Many of his pieces bear one-word names describing emotional states.

The Salisbury-based painter spent almost 30 years as a paramedic. He started in 1992 as a firefighter and paramedic in Miami.

“I didn’t want to be a paramedic. I loved being a firefighter,” Ploplis said.

But the service he worked with had the goal of having a paramedic on every unit. He reluctantly went to a two-year program north of Miami and found he enjoyed it. It turned into a lifelong learning experience, though he left the profession briefly in the early 2000s because of burnout before returning as a paramedic in Guilford County.

He said reaching a new stage of burnout and trauma from the job pushed him to leave the profession again and take up being a full time artist at 55.

“My art is directly related to my experiences I’ve encountered as a paramedic over the years,” Ploplis said. “I did reach a point, this is going on five years now, where I experienced depression, I experienced anxiety and I see a correlation with events that took place while I was a paramedic.  Some of them were pretty tragic.”

When Ploplis moved to a flight program more than three years ago he anticipated more stressful situations and conditions. He was glad he had art to help get through periods that were difficult to cope with, but he said the environment took its toll. He flew 498 missions.

One incident that sticks with him is a tragic case where a child was struck by a car on the first day of school while riding a bicycle.

“The efforts of those who first arrived on scene was pretty remarkable,” Ploplis said.

He also did not expect the COVID-19 pandemic. Many of the people he saw on calls were intubated and had vital functions such as their blood pressure and heart rates maintained by multiple medications.

Initially the anxiety about encountering people with COVID-19 was greater because of the unknowns.

“We were having to take these people, move them over systematically, in close proximity the entire time and having to blindly trust that our PPE is going to work,” Ploplis said. “And two that we’re going to be able to maintain the exposure to others as we move these people around. And then we’re going to load them into the back of a helicopter that equates to the size of a large SUV in the back.”

He was being pushed to focus on something other than paramedicine. He started to focus on the passion that has been a constant for his entire life — art.

He started painting at every opportunity at home. He set up a small part of the helicopter hangar to paint.

“It really helped me to address a lot of negative emotions that I was experiencing as a result of stressors of the job,” Ploplis said. “It allowed me to exercise my ideas.”

People started noticing what he was doing after he started posting his work on social media platforms. A partner at work suggested he start documenting his work on TikTok a well. So, he created an account and racked up more than 5,000 followers. Ploplis said he is not good at social media, but that might make him more endearing.

“Word started getting around, people started asking me about my paintings and how much they were,” Ploplis said. “I started making some sales.”

The money from those first sales went back into materials to make more paintings on a larger scale. Now he has built a client base through friends and word of mouth. The painting of one piece, an 87-inch wide painting titled “Tattered,” was documented on TikTok.

Lynda Replogle, an interior designer in Savannah who became friends with Ploplis through social media, bought “Tattered” before it was finished.

Replogle has always been interested in the arts, went to art school and has been a collector since the ’70s. She tries to give artists good feedback and buy art when she can to support people who take on the endeavor of making a living at it.

“His art is very colorful,” Replogle said. “When I look at his art it makes me feel emotion.”

She never expects to get responses from people she follows, but she seems to have made an impression on Ploplis. Replogle said each of his pieces is surprising and through social media people get insight into how he creates his pieces.

“It starts out looking one way and then he does something to it and it all changes,” Replogle said, adding she is drawn to the visual impact of his work.

Ploplis’ work is mostly abstract. Some of his pieces have recognizable images: a horse, a giraffe, a peace symbol. But most are colorful abstractions. He also has a penchant for single-word titles describing emotional states depicted in his work — “lost,” “surrender” and “fear.”

His first solo exhibition opened at Rail Walk Studios and Gallery on Nov. 6 and remained through the end of 2021. Replogle went to the opening to see “Tattered” on display.

She recalled speaking to him about one piece at his show he painted after having to tell a family their loved one died.

“Those were day-to-day kind of things he had to face and he used his art to help him survive all the emotionally,” Replogle said. “I could never do something like that.

Replogle said Ploplis is humble to the point he does not recognize how good he is.

Ploplis’ longtime friend Sharon Campbell said he is his own worst critic. The Campbells knew Ploplis because Sharon worked with his wife. He also tiled their kitchen more than a decade ago.

“He was still very much an artist,” she said.

Campbell said the family watched him progress over the previous few years, and the family owns the first piece he sold. Her husband watched Ploplis work on the piece and understood he has real talent.

“It’s amazing to see how much he’s grown as an artist and to see that talent emerge as he’s kind of let himself experiment and got into understanding what his talent is and being able to bring that to life” Campbell said.

Campbell commissioned a piece from Ploplis to represent one of her favorite places: standing on the edge of the water at the beach and watching the sand wash away with the tide.

“He recreated that for me,” Campbell said. “It really is, in all the times that I look at it, I’ll find something new about it. It’s something I’ll find different focal points on. It really kind of gives me that feeling of walking on the beach and bringing that into my day-to-day life.”

This dream was a long time coming for, Ploplis, 55. His professional career started in newspapers. He was hired as an artist and photographer for The Berkeley Democrat, a defunct weekly newspaper in Monck’s Corner, South Carolina. He was doing paste-up, courtroom sketches and photography for the paper.

He landed the job as a junior in high school after winning an art contest with a portrait he drew in pencil. One of the judges was an editor at the paper. They ran into each other months later and he was offered a position.

He learned about the production side of the business there and went on to work at the News and Courier, a daily paper in Charleston and its evening edition before the two were combined. He was there for almost two years, but then enlisted in the Marine Corps. He went into military service because he was rejected by every college he applied to.

“And I should have been,” Ploplis said. “I was probably a borderline poor student.”

He was bored and not engaged in school, but doesn’t fault anyone except himself. The majority he applied to were art schools.

In the Marines, he was based in Washington, D.C., as a presidential support marine. He wanted to serve as a combat photographer and that was his initial track, but in boot camp he was convinced to serve in Washington while Ronald Reagan was in office.

He spent four years in the service and discharged in 1990. Afterward, he started his firefighter and paramedic career.

Becoming a flight paramedic is the pinnacle for the profession, It comes with more stress, but most professionals would say “yes” if asked whether they wanted to take the job.

“It’s a cool job,” Ploplis said, adding he always wanted to do it.

He said it is a slightly broader scope of practice that requires more certifications. Flight paramedics have more freedoms and abilities in practice.

“You have to have some additional education in critical care management and transport,” Ploplis said.

He said art started to become a full-time endeavor while he was in the air. He just kept his head down and pushed himself to keep creating. Now, he says, is the first time he’s felt he can create art people like and want to support him through.

“I feel like at this point, right now at this moment in time, I should pay attention to the opportunity that’s been given to me instead of listening to other people all the time telling me that I can’t,” Ploplis said. “I have a greater belief in myself that I can, and I already have. I don’t have to prove anything to anyone else. I’ve proven to myself that I can do this.”