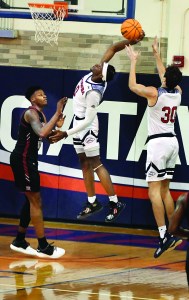 GREENEVILLE, Tenn.  — The big news was that Catawba’s men’s basketball team was able to return to the court on Saturday at Tusculum.

Catawba lost 85-73, but the first game for the Indians in 21 days was mostly positive.

Catawba had been a surging team when COVID protocols shut things down in December.

Tusculum turned things around with an 11-0 run shortly before halftime. Tusculum led 40-37 at the break.

After Catawba moved back in front in the third quarter, the home team answered with a decisive 8-0 run to take control.

Caleb Robinson had 23 points and eight rebounds to lead the Indians.  while  Michael Hueitt scored 15 and had six rebounds. Trevion Lamar added 11, while Bernard Pelote scored 10.

Catawba plans to make up a game at Anderson on Monday and is scheduled to be at home Wednesday against Carson-Newman.

SALISBURY — Livingstone’s women’s basketball team was strong in overtime Saturday, and that was enough to take a 65-56 CIAA win against Virginia State at New Trent Gym.

Both teams sputtered down the stretch. Both squads scored seven points in the fourth quarter.

Livingstone shot 34 percent for the game, but won the rebounding battle and forced 25 turnovers.

Barringer becomes the 11th coach in L-R Volleyball history  after a  successful four-year stint at William Peace in Raleigh.

Barringer was 81-29 at William Peace.

Barringer was a standout athlete at South Rowan in softball, basketball and volleyball and made all-county teams in all three sports.

Barringer was a volleyball standout at Averett University. She earned a masters in business administration in 2017 while serving as a graduate assistant coach. Barringer was the USA South Conference Woman of the Year in 2015 and earned the Don Scalf Award which is given to the top female in the league.

Barringer was an AVCA All-American in 2014 and a four-time all-conference setter.

Barringer is second in Averett history in  assists with 4,654. She was elected to the Averett Athletics Hall of Fame in 2020.

Barringer was an assistant coach at Catawba before hired by William Peace.

Walker is now at the University of Georgia, where he’ll be starting classes this semester.

Lowman starred at East Rowan and was a standout at High Point University. He was an assistant coach at Catawba from 2005-07 and from 2009-21.

The First Pitch Field of Dreams fundraising event to benefit Catawba Baseball will be held on Saturday, Jan. 22.

A social will begin at 5 p.m. behind the baseball outfield wall at the Tailgate America Picnic Area.

At 6:30 p.m., there will be a sneak peek of the renovations of Newman Park, followed by speakers, including keynote speaker David Bennett, and a presentation in the park.

All proceeds support the 2022 spring season for Catawba baseball.

Five  former student-athletes will be inducted into the Pfeiffer Sports Hall of Fame during a banquet held at the Stokes Student Center on Jan. 28.

Tickets to the 2022 Pfeiffer Sports Hall of Fame Banquet can be purchased for $20 online by visiting https://community.pfeiffer.edu/HOF2021 or  calling the Advancement Office at 704-463-3034.

Alumni may attend the banquet at no charge but will need to register online or via phone.

The Jaguars will take on conference rival  Tabernacle Christian School on Monday.

Cost is $30 per participant.   Register through Jan. 15 at Hall Gym or online at www.salisburync.gov/play.   Practices begin the end of January and games start in February.  Call 704-638-5289 for information.