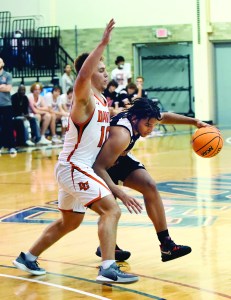 Salisbury’s Cameronn Stout drives against Davie in the Christmas tournament. Photo by Wayne Hinshaw, for the Salisbury Post.

Salisbury held Lexington to five points in the second quarter, built a 17-point halftime lead and took a 70-45 Central Carolina Conference win that was easier than expected.

Lexington (9-4, 2-1) had been averaging well over 60 points and came in with four players averaging double figures.

Senior Cameron Stout had 17 points. Like Harris, he’s scored in double figures in every game this season.

Javien Reid scored 20, while Maury Gilley had nine for the Yellow Jackets.

Salisbury is tied for first with Thomasville. Lexington and North Rowan have one league loss.