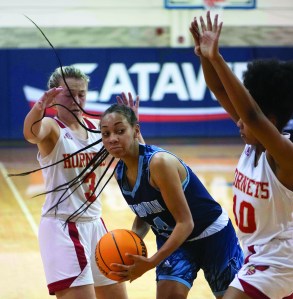 LEXINGTON — It was business, as usual, for the Salisbury girls basketball team on Friday.

Everyone scored in an 80-25 romp at Lexington, as Salisbury took its 33rd straight conference game. The last loss in a Central Carolina Conference regular-season game for the Hornets was to a Lyrik Thorne-led Ledford team on Feb. 5, 2019.

Ranked second in the 2A, the Hornets (11-1, 3-0) weren’t seriously challenged. They led 51-17 at halftime, and starters sat down early in a running-clock romp.

Unfortunately for overmatched opponents, the second unit is pretty good.

Jaleiah Gibson returned after missing a game due to an allergic reaction.

Senior Rachel McCullough continued her steady push toward 1,000 career points and is at 963.

The scariest part of such a lopsided result is that Lexington (7-5, 2-1) has been beating people.