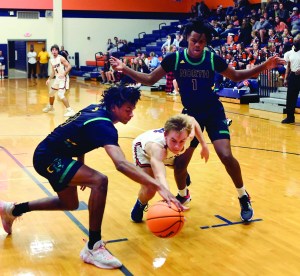 North’s Kemon O’Kelly and Amir Alexander against Carson. Photo by Wayne Hinshaw for the Salisbury Post.

TYRO — West Davidson stayed in the game with North Rowan’s basketball team for a half, but the Cavaliers were able to pull away for a 68-43 victory.

North settled for a 28-20 lead at halftime in the Central Carolina Conference game, but outscored the Green Dragons 21-8 in the third quarter to break it open. Quashawn Carpenter and Amir Alexander made 3-pointers in the quarter.

George Maxwell added eight, including six fourth-quarter free throws, while Alexander and Jericho Charleston had seven each for North (9-1, 3-1), which stayed in the thick of the conference race.

North has won four straight. The Cavaliers’ loss was at Thomasville.