First-day hike a terrific way to start the new year 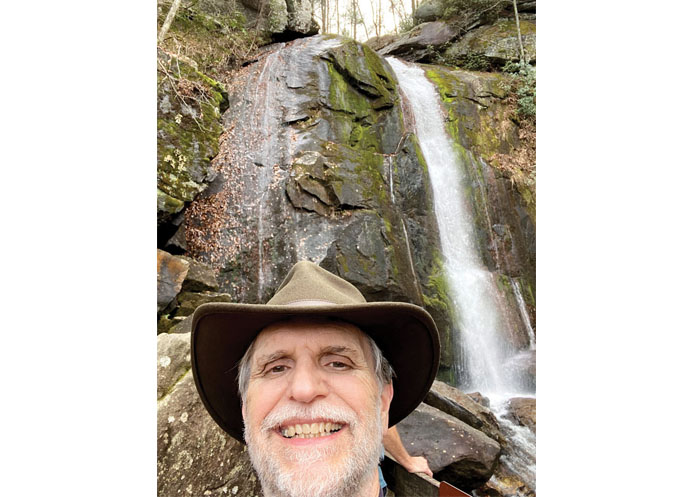 Russ Stevens at the top of the falls at South Mountain State Park. Submitted photo.

Even though the pandemic still rages, the state park service offered first-day hikes this year. Last year, they were all canceled. Since I’ve been vaxxed and boosted, I did this year’s hike. Over the 10 years of living in Salisbury, I’ve done first-day hikes at Morrow Mountain, Eno River, Pilot Mountain, and Lake Norman state parks. This year, South Mountain State Park looked good. And it was.

The hike was led by Ranger James Yates, who also brought his wife. Since the hike was rated moderate by All-Trails, he took it slow. There were all ages and fitness levels in the couple of dozen participants. Some also brought their dogs to hike with them. The dogs ranged in size from “pocket dogs” to bigger-than-German-shepherd-sized dogs.

The hike had two options. The first was to hike to the top of the falls and go back down. It was one mile up and one mile back down. For a smoother downhill, the second option was to go above the falls and take the loop back down. There were a lot fewer stairs to get back down that way, but it made the total hike 2.7 miles.

As I said, the longer loop avoided the stairs that got us to the top of the falls. Those stairs were some serious climbing, and I don’t think all of the group made it all the way. Even partway, the views were spectacular and worth the hike. I made it to the top of the falls. At that point, Ranger Yates told the group they were each on their own to go back down the way we came up or over the top to take the longer but smoother path. A few of us that had been hiking together decided to go over the top. It was worth it. The views from the tippy-top were also spectacular.

On the hike down, there were many comments about downhill hiking being just as hard as uphill. I couldn’t disagree. But when we got to the bottom of the hill, there was a side hike to a second smaller fall that we decided to take as a group. It was much less rigorous but also worth it.

On the whole, the hike was terrific. The people I met were nice, and we had some interesting conversations on the trail. The only very small downside was being friendly with a big dog who slimed my pants. He was very friendly and a slobberer.

Put the first-day hike on your calendar for next year. I can’t guarantee that we’ll have a 70-plus degree day and clear weather. But it’s fun, and if you aren’t into serious hiking, you can go to Lake Norman State Park for their hike. It was very easy when I went.

Russ Stevens lives in Salisbury, sings in the Salisbury-Rowan Choral Society, and teaches online for multiple colleges around the country.