College basketball: Bacot leads UNC past Virginia; Wolfpack not so lucky against Clemson 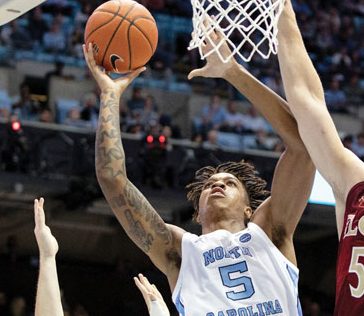 CHAPEL HILL — Armando Bacot had career highs of 29 points and 21 rebounds to lead North Carolina to a 74-58 win over Virginia on Saturday.

Bacot was 12-of-18 shooting and became only the second Tar Heel to collect 20 rebounds in the Dean E. Smith Center. Sean May did it three times. Bacot, who came into the game second in the nation with 10 double-doubles, posted his seventh in a row.

Brady Manek made five 3-pointers and added 19 points and five assists for the Tar Heels (11-4, 3-1 Atlantic Coast Conference), who remained perfect at home this season with eight wins while bouncing back from a 78-73 loss to Notre Dame on Wednesday. Caleb Love had 16 points with four 3-pointers and also had five assists.

Reece Beekman scored 13 points, Armaan Franklin 12 and Jayden Gardner 10 for the Cavaliers (9-6, 3-2), who were coming off ACC road victories over Syracuse and Clemson.

Two Bacot baskets and 3-pointers from Love and Manek put UNC up by double figures for good midway through the second half. A 10-0 run with Manek hitting two more 3-pointers gave the Tar Heels their largest lead — 25 points — with 3 1/2 minutes left.

UNC took the lead for good five minutes into the game on a Bacot bucket but only led by six, 31-25, at halftime.

The teams were close in shooting percentage but UNC was 11 of 25 from the arc while Virginia was 6 of 12. With Bacot leading the way, UNC won the boards 36-28.

UNC was still without Dawson Garcia, who has missed nearly three full games after suffering a concussion early in a win over Boston College last Sunday.

UNC has held opposing teams to 65 points or fewer in its last eight wins. Virginia came in 10th nationally in scoring defense at 57.7.

Virginia is host to Virginia Tech on Wednesday while UNC will be home against Georgia Tech next Saturday.

Al-Amir Dawes added 16 points and was in the middle of the game-winning run for the Tigers (10-5, 2-2 Atlantic Coast Conference).

Dawes hit a jumper with 6:04 remaining to put Clemson up 57-53. Alex Hemenway made good on three free throws at 4:56 and Chase Hunter closed the 7-0 surge with a bucket with 31/2 minutes to play. The 62-54 lead was the largest of the game for the Tigers.

Dawes added a layup and a pair of free throws with 35 seconds left to help thwart the Dereon Seabron-led Wolfpack surge.

Sebron scored nine points in the last three minutes to lead North Carolina State (8-8, 1-4) with 27 points. He had 19 in the second half. Casey Morsell hit a 3-pointer with a second left to make it 68-65 but Honor came through.

Thomas Allen, who finished with 10 points, Sebron and Jericole Hellems hit 3-pointers to open the game as N.C. State took a 9-0 lead. Clemson used a 10-0 run to go up 23-16 but a Hayes triple at the buzzer had the Wolfpack within 30-28 at the break.

Sebron’s 3 and two Hellems free throws put N.C. State on top in the first minute of the second half. Hall scored four points as Clemson answered with eight straight. Three times the Wolfpack pulled even, the last with 9:09 to play as Cam Hayes made two free throws to make it 49-all.

Hall responded with a pair of dunks and Clemson stayed on top.

Both teams are on the road on Wednesday; Clemson at Notre Dame, N.C. State at Louisville.

Dunn finished with a career-high 33 points to lead the Owls.

Tristen Newton, whose 19.0 points per game heading into the contest led the Pirates, had only 8 points on 3-of-11 shooting.