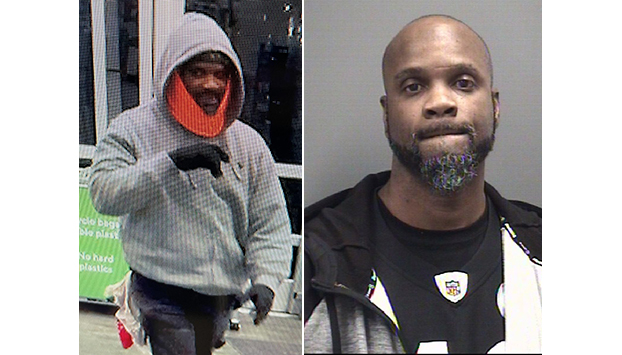 A screenshot from security camera footage on the left and Moore's arrest photo on the right.

ALBEMARLE — A Salisbury man was arrested Thursday for an armed robbery at the Albemarle Walmart.

Nigel Donovan Moore, 46, faces charges of robbery with a dangerous weapon, assault by pointing a firearm and carrying a concealed weapon. Additional charges are expected.

Moore is accused of robbing the Walmart in Albemarle at 10:21 p.m. Tuesday. Police said Moore entered the store wearing a gray hoodie, orange face covering and dark pants. He’s accused of approaching a cashier, displaying a handgun and demanding money.

He left the store with an undisclosed amount of money and several items, the Albemarle Police Department said. No one was injured during the incident.

A tip from a citizen led to Moore’s arrest. The Salisbury Police Department helped in the investigation.

He was given a $100,000 bond and booked into the Rowan County Detention Center.