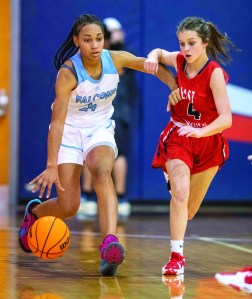 Sophomores De’Mya Phifer and Lauren Arnold had huge games for the Falcons and combined for 48 points.

“After Tuesday’s disappointment (a 66-54 loss at Lake Norman Charter), it was important for us to bounce back and play good team ball with lots of energy,” West head coach Ashley Poole said. “We were much better on the defensive end tonight.”

West’s win knocked Central Cabarrus (7-7, 3-2) out of a tie for first in the South Piedmont Conference. West (7-4, 3-2), Central and Lake Norman Charter are tied for third behind Northwest Cabarrus and Carson.

After a close first quarter, the Falcons took control with a 24-point second quarter. Phifer poured in 14 of her career-high 26 points in the quarter.

West put the game away with a 26-point third quarter.

Arnold had the hot hand in the third quarter and finished with 22. Mya Edwards (10) and Emma Clarke (9) also scored well for the Falcons.

West is scheduled to play at Salisbury on Tuesday.