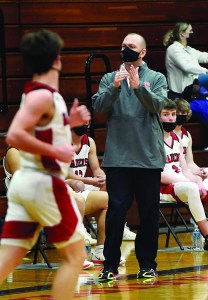 HUNTERSVILLE — It’s been a tough season for the South Rowan boys basketball team in the 3A South Piedmont Conference, but head coach Daniel Blevins was encouraged by what he saw on Friday in a 79-36 loss at Lake Norman Charter.

“We’re improving, and that’s where the focus is,” Blevins said. “We played well most of the first half, but then we got fatigued and ended the half pretty flat. They had a flurry of 3s in the second half to put it out of reach.”

Gabe Pozyck, who had a huge game Tuesday at Concord with 19 points and 5-for-7 3-point shooting, was held to four points by the Knights.

South played with eight in uniform. Six scored against the Knights (6-5, 3-2).