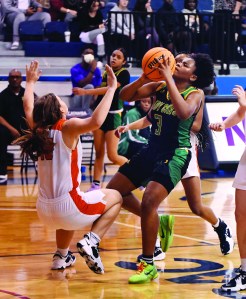 North’s Brittany Ellis  vs. Carson in the Christmas tournament. Photo by Wayne Hinshaw, for the Salisbury Post.

This was the closest league game for North (9-3, 4-0) so far, but the Cavaliers, who play with a roster of seven, were able to stay on top of the 1A/2A league.

Hannah Wilkerson, Bailee Goodlett and Brittany Ellis scored 15 each for the Cavaliers.

Chloee Stoner had four points and five rebounds. Dasia Elder also got in the scorebook.

Wilkerson is closing in on 1,300 career points and is the No. 5 scorer in school history.

Salisbury routed Lexington on Friday to hand the Yellow Jackets their first league loss. Salisbury is 3-0 in the conference.