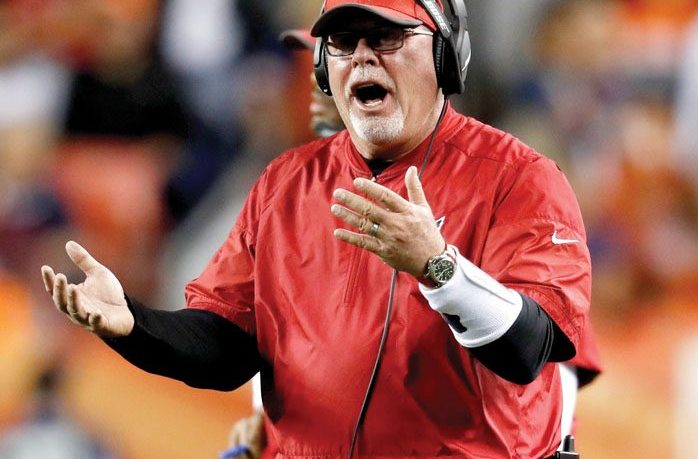 TAMPA, Fla. — While it would be nice to get Tom Brady and Tampa Bay’s other healthy starters some rest, coach Bruce Arians isn’t counting on it when the defending Super Bowl champions close the regular season against the Carolina Panthers.

The Bucs (12-4) have already won the NFC South and matched a franchise record for regular-season wins. However, there’s still plenty to play for Sunday with Brady and Co. looking to stay in the running for a No. 2 playoff seeding.

“Oh, I would hope that would happen. … It happened three times this year, but the thing is, who do you take out? Because you can’t take them all out,” the Bucs coach said. “You only dress 47 (players). You can’t have all of your second string go in because there’s not enough of them. It’s a time where this guy is a little nicked up and get him out of there.

“I hope that would happen, but I don’t anticipate it.”

The Bucs currently hold the No. 3 seed in the NFC. A victory, combined with a loss by the Los Angeles Rams, would propel Tampa Bay into the No. 2 spot.

That would ensure the reigning Super Bowl champs a second home game if they win their playoff opener next week.

“You play to get that second seed, that’s huge,” Arians said. “We’re not resting anybody. We’re playing to win.”

The Bucs spent the early part of the week answering questions about Antonio Brown’s bizarre exit from last week’s come-from-behind win over the New York Jets.

Brown alleged Arians cut him after he refused to re-enter the game because of an ankle injury. Arians said Brown was upset that he wasn’t having enough passes thrown to him.

The coach reiterated the defending champs are focused on taking care of business against the Panthers.

“Our team is great. Our team knows the truth. They know what happened,” Arians said. “Our guys are fine. They are ready to play Carolina.”

The Buccaneers saw the Panthers rotate quarterbacks two weeks ago in their 32-6 rout of Carolina in Charlotte as Cam Newton and Sam Darnold split reps.

But Darnold is expected to get his second straight start since returning from a shoulder injury and handle the large majority of reps in Sunday’s rematch. Newton could see some action in short-yardage and goal-line situations in what could be his final game with the Panthers. The 2015 league MVP saw limited action last week against the Saints, running one time for 5 yards. He did not attempt a pass.

Darnold, who is 4-6 as the team’s starter, is under contract for more than $18 million next season, while Newton is an unrestricted free agent.

Neither Carolina quarterback had much success against the Bucs in the last meeting as they were sacked a combined seven times.

The Panthers also allowed seven sacks in a loss last week to the Saints, and over the past three games have surrendered 18 sacks. For the season, the Panthers have allowed 50 sacks, fourth-most in the league behind only the Baltimore Ravens (54), Chicago Bears (51) and Cincinnati Bengals (51).

Coach Matt Rhule said this week it is time for the Panthers to make a “true investment” in the offensive line.

Bucs WR Mike Evans is the only player in NFL history to begin a career with seven consecutive seasons with at least 1,000 yards receiving. He’s 54 yards shy of extending the record to eight.

Hall of Famer Randy Moss is the only other receiver to start with at least six straight 1,000-yard seasons.

The Panthers have been eliminated from playoff contention. They currently hold the sixth spot in the 2022 NFL draft, but could move up to fifth with a loss Sunday and the New York Giants beat Washington.

BETTING LINE: Buccaneers by 8, according to FanDuel SportsBoo k.

TURNOVER DIFFERENTIAL: Panthers minus-11; Buccaneers plus-8

PANTHERS PLAYER TO WATCH: QB Sam Darnold will get another start and a chance to prove himself as the franchise turns its attention to next season. Darnold is under contract for more than $18 million in 2022 so coach Matt Rhule needs to decide if Darnold is his guy or if the franchise should move on and find yet another quarterback.

BUCCANEERS PLAYER TO WATCH: QB Tom Brady leads the NFL in completions (456), passing attempts (682), passing yards (4,990) and touchdown passes (40) entering the final week of the regular season. Since 1991, Drew Brees (2008) and Peyton Manning (2013) are the only players who have led the league in all four categories. The seven-time Super Bowl winner is 10 yards away from joining Brees as the only QBs with two or more seasons with 5,000 yards-plus passing.

KEY MATCHUP: Bucs’ pass rush vs. Panthers’ offensive line: Carolina’s offensive line has been abysmal, allowing seven sacks in each of the last two games and 18 sacks over the past three games. Only three teams have allowed more sacks this season than Carolina, which has surrendered 50. Tampa Bay’s defense, led by Shaquil Barrett, enters the game fifth in the league with 45 QB sacks. Expect some all-out blitzes from the Bucs.

KEY INJURIES: The Panthers will get a number of players back this week from the COVID-19 reserve list, including OLB Haason Reddick, the team’s leader in sacks (12). However, the team this week placed starting left tackle Cam Erving (foot) and wide receiver Terrace Marshall Jr. (foot) on injured reserve, so they are done for the season. Rookie Brady Christensen will make his second straight start at left tackle. … Barrett (knee), LB Jason Pierre-Paul (shoulder), RB Ronald Jones and C Ryan Jensen (shoulder) were all on the injury report and did not participate in a walk-through practice Wednesday, when the team began preparation for the Panthers. WR Mike Evans (hamstring) and CB Richard Sherman (Achilles tendon) were listed as limited participants.

SERIES NOTES: The Bucs have won three in a row against the Panthers, including a 32-6 victory two weeks ago that clinched Tampa Bay’s first NFC South title since 2007. … Evans has 67 receptions for 904 yards and five TDs in 14 career games against the Panthers.

STATS AND STUFF: The Panthers have lost six straight games and 11 of their last 13 overall. … As things stand now, the Panthers have the No. 6 pick in next year’s NFL draft, but will have a chance to move up with a loss on Sunday. … Darnold is 4-6 as the team’s starting quarterback. QB Cam Newton is expected to be active in a reserve role. … RB Chuba Hubbard is one of four rookies with 500 or more yards rushing and five TDs this season. Najee Harris, Elijah Mitchell and Rhamondre Stevenson are the others. … WR D.J. Moore had eight catches for 120 yards in his last road game at Tampa Bay. Moore needs two receptions to surpass his career high of 87. … DE Brian Burns has a sack in two of his last three road games. … Evans is the only player in NFL history to begin a career with seven consecutive seasons with 1,000-plus yards receiving. He enters Sunday’s finale 54 yards shy of extending the record to eight straight seasons. … Brady is coming off the 13th 400-yard passing performance of his career, tied with Hall of Famer Dan Marino for the third most in league history. Brees (16) and Manning (14) are the only players with more. … With WR Antonio Brown no longer a Buc after leaving the sideline in the middle of last week’s game and being released, backup Cyril Grayson’s playing time figures to increase. He had a career-high six receptions in last week’s come-from-behind win over the Jets, including the winning TD with 15 seconds remaining. … TE Rob Gronkowski had the 31st 100-yard receiving game of his career last week, tied with Hall of Famer Tony Gonzalez for the most by a tight end.