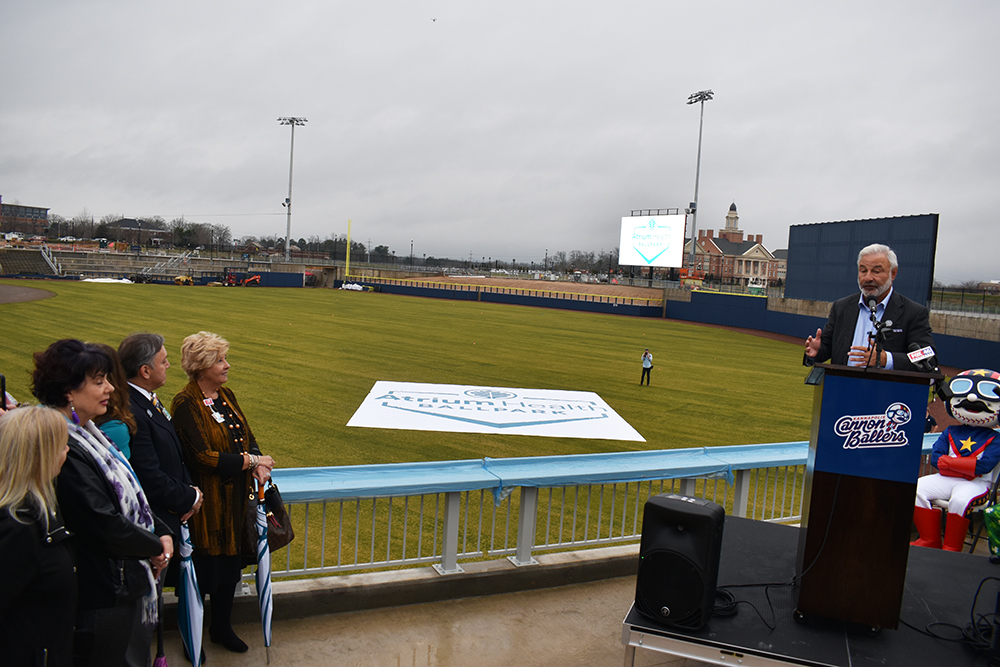 KANNAPOLIS — Andy Sandler and his family are now the owners of two North Carolina Minor League Baseball teams separated by less than 70 miles.

Sandler on Tuesday announced the acquisition of the Greensboro Grasshoppers through his company Temerity Baseball. The Grasshoppers are the High-A affiliate of the Pittsburgh Pirates. Sandler, whose office is located in Washington, D.C., is an entrepreneur and investor in the financial services industry.

Sandler’s purchase of the Greensboro Grasshoppers comes a little over three years after Temerity bought the then-Kannapolis Intimidators. The rebranded Cannon Ballers, a single-A affiliate of the Chicago White Sox, played their inaugural campaign at Atrium Health Ballpark last year and will begin their 2022 season on April 8.

Without his experience owning the Cannon Ballers, Sandler likely wouldn’t have purchased the Grasshoppers.

“It is the reason for the decision,” Sandler said. “That has been such a positive experience for myself, for our family, for our professional team. In the business world, it’s hard to find businesses where you can do well by doing good. Being the steward of a Minor League Baseball team in places like Greensboro and Kannapolis gives you that opportunity.”

As Temerity takes ownership of the Grasshoppers, Sandler finds himself inheriting a much different organization than the one he bought in Kannapolis.

“In Greensboro we’re inheriting a crown jewel,” Sandler said. “The first thing we have to do is not screw it up.”

When Temerity bought the Intimidators in late 2018, the team was still playing at its stadium on Moose Road, close to I-85. Temerity rebranded the team as the Cannon Ballers, homage to the city’s history as a mill town and the Cannon family. The mascot, Boomer, has a mustache resembling that of the late Dale Earnhardt, who previously was an owner of the franchise and called Kannapolis home.

Following the rebranding, the Cannon Ballers moved to the $52 million Atrium Health Ballpark at the heart of the city’s downtown revitalization project.

Even with his focus on the Cannon Ballers back then, Sandler had his eyes on the Grasshoppers as a model and potential business play in the future.

“You’d go to Greensboro and all the fans were really excited,” Sandler said. “It was a great stadium, a great location. We said to ourselves, ‘If ever we buy a second team, if this one is ever available, this is probably the right one.’”

When the opportunity arose for Sandler to purchase the team from its roughly 60-person ownership group, he jumped at the chance. For Sandler, the acquisition presented an opportunity to not only own a second team, but a ballpark as well. First National Bank Field, where the Grasshoppers have played since 2005, is nestled in downtown Greensboro.

Now, Sandler plans on implementing tactics that have worked in Kannapolis to “activate” the centrally-located ballpark.

“While this team is really well-run and does very well, we viewed the stadium as an underutilized community asset,” Sandler said. “We are in a great place for us to do some of the things we’ve done in Kannapolis in terms of activating the stadium year round, bringing in food and beverage, bringing in other forms of entertainment.”

Sandler anticipates renting the stadium out for weddings, parties and bringing in musical acts, all of which have been done in Kannapolis, to turn First National Bank Field into a facility that is used year round.

Along with bringing more events to First National Bank Field, Sandler is open to the idea of using the ballpark to catalyze nearby development in downtown Greensboro. Sandler is in the midst of doing just that in Kannapolis. Temerity and Lansing Melbourne Group broke ground last month on a project to construct two new buildings beyond Atrium Health Ballpark’s right field wall.

Called “Stadium Lofts,” the development will include about 100 apartments and 80 condos. It will also serve as the permanent home to the Cannon Ballers team offices, team store and ticket office. A restaurant called “Towel City Tavern” will provide fans with smoked barbecue and other food in addition to locally brewed beer. There will also be close to 8,000-square-feet of retail space.

“That’s going to really activate downtown 360 days a year as opposed to if you just have a stadium where a baseball team plays, you activate 70 days a year,” Sandler said.

There isn’t as much available space around First National Bank Field in Greensboro, but Sandler said he’s still keen on working with business owners on projects the community wants to see.

“That’s a much more built up footprint, but it’s certainly what we like to do because we like to create value as a way we operate as a team and a stadium,” Sandler said.

While Sandler doesn’t expect there to be many changes from a managerial standpoint for Greensboro, he does believe the team’s identity is in store for an update.

“We’re certainly going to do a brand refresh,” Sandler said. “Whether and to what extent we do anything beyond that, we haven’t made any decisions. Our major league affiliate, the Pittsburgh Pirates, aspires to, as do we, a much closer branding relationship. So, we’ll be working with the Pirates on ideas on how to better align the Grasshoppers and the Pittsburgh Pirates.”

Sandler hopes his ownership of the Grasshoppers turns out to be a similar experience to what he’s had in Kannapolis.

“If this turns out to be anywhere near as satisfying an experience as Kannapolis was,” Sandler said, “then it’s going to be an absolute home run for us.”