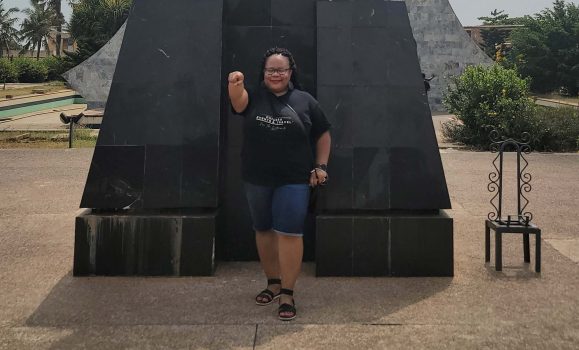 Photo submitted - Anita Curry at the Kwame Nkrumah site. Nkrumah was the first prime minister and president of Ghana. 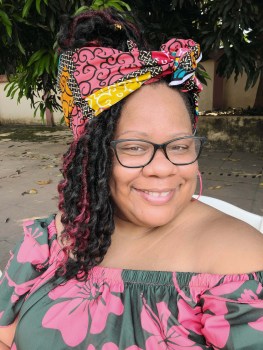 Submitted phot - Anita Curry with a traditional Ghanian head wrap on. A local woman showed her how to tie it.

SALISBURY – Anita Curry first visited Ghana in 2019, and was not expecting to go alone.

By mid-November in 2019, everyone the Knox Middle School English teacher planned to go with had dropped out, so she decided to take the journey solo. She is interested in her family history, and right before the trip she used a genetic profile service that revealed she has a bit of Ghanian heritage. Now her goal is to visit every country in her genealogical background.

What attracted her to Ghana in the first place was the 400th anniversary of the first African slaves in Virginia. On that visit, she saw the Ghanian slave castles, where the slave trade stored people in abysmal conditions while awaiting sale.

“Being African American, you know I’ve only heard of such places,” Curry said. “I can’t even say I read about this in school.”

This year, she returned to Ghana, leaving after Christmas and returning before classes began this week. This time there was nothing as heavy as the slave castles, but she did visit the Ghana Armed Forces Museum and learned about soldiers in conflicts and having to fight barefoot.

She also visited the city Kumasi and saw a Kente cloth factory where craftspeople were producing the iconic Ghanian fabric. She got to try making some herself.

“I would have been fired if you based me off of speed,” Curry said.

She also visited a cacao farm and saw all the products the important crop produces.

She has only been to one of the places on her list of eight ancestral countries so far. She has a significant amount of Nigerian heritage and hopes to visit that country soon.

Growing up, Curry was a military child. Moving around and changing schools multiple times did not make her appreciate traveling. She is not sure what sparked her to want to venture out more early in her career as a teacher, but she had a change of heart that made her want to see the world.

“I’ve only read about these places, I’d like to see them,” Curry said, adding textbooks and other people’s experiences don’t do places justice.

She started coordinating group trips, but got tired of the hassle and started taking solo trips abroad. Over time, she has become better at blending in with the locals, avoiding scams targeted at tourists and making her way across foreign places.

Being extra prepared has helped, too. In France, she had a cell phone stolen out of her hands. She lost some photos, but she had a backup.

She brings back her experiences to the classroom, too. She said some students are not able to travel, so she brings back pieces of currency from places she visits to show students, and she sometimes works with another teacher to put global education into mathematics.

It is also a good relationship builder because students are interested in where she has been and where she is going next.

Traveling has been significantly more complicated during the COVID-19 pandemic. Curry said many countries require full vaccination to travel there. Going to Ghana also requires a yellow fever vaccine and there was a shortage in 2019 when Curry got hers. She also had to get a typhoid booster and pills to treat malaria.

There is also a three-day COVID-19 testing rule to travel there. She was tested initially but when she uploaded her documents ahead of time she fell just outside the window, so she had to scramble to get tested on Christmas day so she could leave the next day. When she got to Ghana she had to be tested again.

She said when she arrived, she felt they were taking appropriate steps as well, with masking, distancing requirements and vaccine record checks.