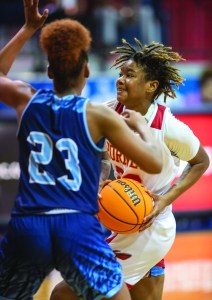 THOMASVILLE — For many years, East Davidson was tall and fundamental and shot the lights out and was Salisbury’s fiercest rival in girls basketball.

There probably were years when they were the two best teams in the state in 2A. Those were battles to the wire, frequently three times a year and sometimes four times.

East Davidson has won one game, while losing 50, during the last three seasons.

Salisbury, which has won the last three CCC championships, has been on a roll for a while and the end isn’t in sight.

That score came as no surprise, but it still brought some sadness for those who remember what the rivalry once was.

Rachel McCullough scored 16 points. She made three 3-pointers while raising her career points total to 949.

Kiki Walker also made three 3s and scored a season-high 13.

Jaleiah Gibson missed the game after suffering an allergic reaction, but she’s not expected to miss Friday’s game at Lexington.