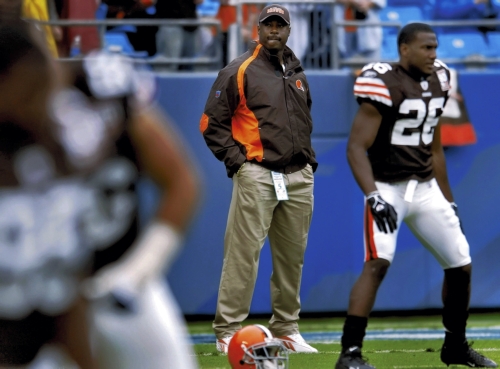 SALISBURY — The Black College Football Hall of Fame announced its Class of 2022 on Tuesday.

The 6-foot-5, 245-pound Coates was a major NFL figure in the 1990s as a durable, pass-catching tight end for the pre-Brady New England Patriots.

When the NFL saluted an all-decade team for the 1990s, Coates was named as the second team tight end behind Shannon Sharpe. He still ranks among the NFL’s all-time leaders for receiving yards by a tight end.

Coates came to Livingstone from Greenwood, S.C., where he hadn’t played football until his senior year of high school.

He blossomed in Salisbury, breaking some school records for the Blue Bears with 103 catches for 1,268 yards and 18 touchdowns in three seasons. As a senior, he was first team All-CIAA and a Black College Sports All-America.

Coates lasted until the fifth round of the 1991 NFL draft. The Patriots made him the 124th overall pick.

His first touchdown catch and the only TD catch of his rookie season came on Dec. 8, 1991, a 2-yard flip in the fourth quarter from forgotten quarterback Hugh Millen.

By 1993, however, the Patriots were making strides under new head coach Bill Parcells and offensive coordinator Ray Perkins. Drew Bledsoe, a 21-year-old quarterback, took the reins of the offense, and Coates became his go-to receiver. In a breakout season, Coates had 53 receptions for 659 yards and eight touchdowns. Two of Coates’ TDs were game-winners in the fourth quarter.

That season seemed spectacular at the time, but Coates was just getting started.

His 1994 season would be his greatest and was one for the ages. New England jumped from five wins to 10. Coates was a huge part of it with 96 catches for 1,174 yards and seven TDs.

He was recognized that season as the league’s top tight end. That was the first of his five consecutive Pro Bowl seasons.

He followed that success with 84 catches for 915 yards and six TDs in another All-Pro season in 1995.

The catches and the touchdowns kept coming through 1998 — more than 600 receiving yards and at least a half-dozen touchdowns each season. He had an 84-yard TD catch in 1996 that was one of the league’s longest plays.

He finally started to slip a little in 1999 when he was 30. His production dropped that season to 32 catches for 370 yards.

His last two NFL touchdown catches came in the fourth quarter on Sept. 19, 1999. Bledsoe hit him twice for TDs as the Patriots rallied from a 28-14 deficit against the Colts to win 31-28.

Coates’ final NFL season was spent with the Baltimore Ravens in 2000. His statistical contributions (nine catches, 84 yards) were modest, but he earned a Super Bowl ring.

He played in 158 NFL games (149 with the Patriots) and finished one career catch short of 500. He amassed 5,555 receiving yards. He had an even 50 touchdown catches in regular-season games and added one during the 1996 playoffs.

He’s second on the Patriots’ career touchdown list, third in receptions and fourth in receiving yards.

Coates, 52, has coached at a number of places, everywhere from Livingstone and St. Augustine’s to NFL stints with the Dallas Cowboys and Cleveland Browns.

He’s previously been inducted into the Halls of Fame of the New England Patriots, South Carolina, the CIAA and Livingstone.

The Black College Football Hall of Fame class of 2022, which also includes Nate Newton (Florida A&M) and Donald Driver (Alcorn State), will be inducted as part of the Juneteenth celebration in Atlanta on June 18.