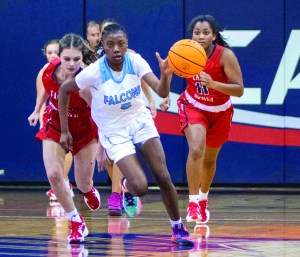 HUNTERSVILLE — West Rowan’s girls had a chance to move into a tie for first place in  on Tuesday, but the Falcons came up short at Lake Norman Charter.

West allowed 26 points in the third quarter of the South Piedmont Conference contest and lost 66-54.

“They’re not bad, not at all, but the biggest thing tonight was us not playing very well,” West head coach Ashley Poole said. “We got in foul trouble and foul trouble got to us.”

Lauren Arnold kept West in the game in the first half. The Falcons were down 23-20 at the break despite getting only two points from leading scorer De’Mya Phifer.

Phifer got rolling in the third quarter, but Arnold fouled out. West never had both of its big scorers going at the same time.

Phifer, a sophomore point guard, had an amazing second half, scoring 23 of her career-high 25 after the break.

Ordinarily that would’ve been enough to pull out a win, but West (6-4, 2-2) allowed more points than it has in any game this season.

Lake Norman Charter, which has lost to Carson and Central Cabarrus,  enjoyed its biggest offensive outburst of the season.