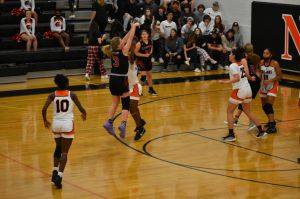 The Raiders’ 55-21 South Piedmont Conference victory was decided after a one-sided first quarter that ended with South on top 25-2.

Ten Raiders scored in the game.

The most significant development was South (6-6, 2-2) reaching the .500 mark for the first time during Alex Allen’s three-year coaching tenure.

South won six games in her first two seasons, but now  has matched that total in about half a season.

South has won four of its last five outings.

Rymer is the single biggest difference-maker. She didn’t play last season, but is averaging 18.2 points as a senior. She’s scored 218 points in 12 games this season and has 806 for her career.

South also has benefited from the addition of freshmen Atwell and Dextraze and improvement from the returning members of the roster.

South’s game at Lake Norman Charter has suddenly become a reasonably big one on Friday, a game between two teams hoping to contend in a league where everyone has at least one loss.

Lake Norman Charter had a big home win against West Rowan on Tuesday.