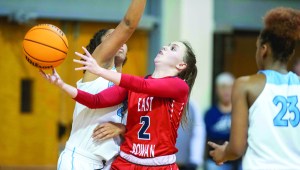 CONCORD — East Rowan’s girls basketball team got off to a solid start on Tuesday, but couldn’t sustain it.

It was the third straight loss for East, which also scored in the 30s in its two games in the Christmas tournament.

Madie Honeycutt paced the Mustangs (4-7, 1-3) with 10 points, her third double-figure outing of the season.

Haley, a 6-foot senior who averages a double-double, had 15 points and 12 rebounds.

Lewis, a sophomore guard, had 14 points and seven rebounds.

The Vikings stayed in the thick of the SPC race and moved into a tie for first place with the help of Carson’s loss at Northwest Cabarrus.