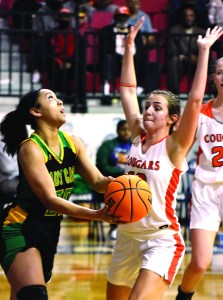 Carson’s Riley Isley defends against North Rowan in the Christmas tournament. Photo by Wayne Hinshaw, for the Salisbury Post.

KANNAPOLIS — The calls, the breaks, the bounces, all went against Carson’s girls basketball team on Friday at Northwest Cabarrus.

Carson lost the South Piedmont Conference contest 43-42 after leading by five with 45 seconds left. The Trojans won on a stickback at the buzzer.

Both benches received technical fouls in a hack-filled game that won’t make many highlight reels.

The bottom line was Carson left the gym in a three-way tie for first with Northwest and Central Cabarrus in a wide-open race instead of being all alone at the top.

“It was an extremely disappointing night,” Carson head coach Brooke Stouder said. “Some things happened, but if we just control the things that are within our control, we still come out of there with the win. If we make our free throws, we win. If we box out at the end, we win. I’m not going to beat our girls up because they feel badly enough already, but we had a lot of chances to change this outcome.”

Carson scratched out an 18-15 lead at the half and was up 28-23 going to the fourth quarter, with two fast-paced teams scoring well below their norms.

Carson’s Camden Corley drove and was fouled with 46 seconds left. She made the first of  her two free throws for a 42-37 lead. Carson would have a number of possessions down the stretch, but wouldn’t score again.

Northwest’s Chaunesse Barringer drove for a layup with 38 seconds left to make it 42-39.

Carson turned it over.

Northwest turned it over with 30 seconds left, with several Cougars getting on the floor for a loose ball. There was a tie-up, and Carson had the possession arrow.

After a timeout, with 22 seconds left, Carson was inbounding from the side, when the Cougars were called for an illegal screen.

Northwest drove and missed, but Kennedy Hilsenroth scored off the offensive board to cut Carson’s lead to one.

Northwest (7-1, 3-1) stole Carson’s inbounds pass, and a foul was whistled. Barringer went to the line with two free throws with 5.7 seconds left.

She missed both attempts, but Hilsenroth was able to keep the ball alive. Hilsenroth missed her follow attempt, but McKenzie McIntyre rebounded and put it in for the game-winner.

“You have to give Northwest credit,” Stouder said. “They were down in the fourth quarter, but they battled. There at the end, they missed two free throws, but they didn’t stop. They stayed with it.”

Carson is normally an outstanding free-throw shooting team, but the Cougars went 12-for-24 at the foul line. That led to defeat as much as anything.

Carson had a 19-game winning streak in conference play ended.

Barringer led the Trojans with 11 points.

Carson will not play Friday. The East-Carson game has been rescheduled for Jan. 19.

“We’ve got a lot to work on and we’ve got several days to work,” Stouder said.