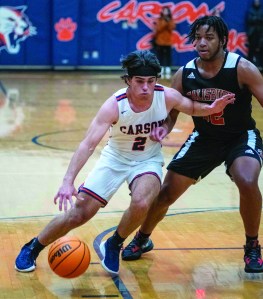 KANNAPOLIS — It was a typical Tuesday for Carson’s boys basketball team.

The Cougars were competitive and hung around until the end, but they walked away as 49-43 losers at Northwest Cabarrus.

The problem for the Cougars is scoring. Carson has only topped 60 once. That was in a Christmas tournament consolation victory against South Rowan.

Carson has scored under 50 seven times, and it’s hard to win those.

Cameron Burleyson led Carson with 10 points. Colin Ball had nine. Jay Howard and Mikey Beasley helped out with seven each.

Northwest guard Javier Matthews has been a problem for opponents all season and led the Trojans with 22 points.