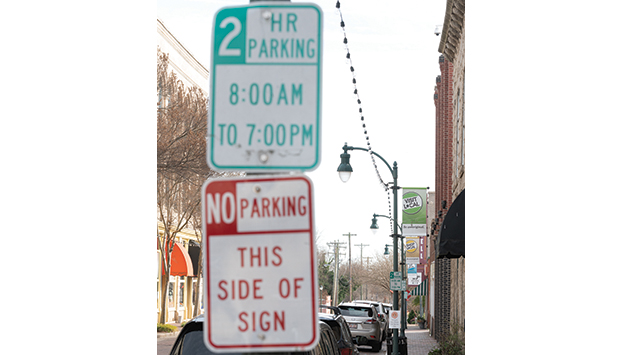 Josh Bergeron / Salisbury Post - Parking signs along Fisher Street in downtown Salisbury tell parkers about a two hours limit as well as that no parking is allowed close to the stop light at Main Street.

SALISBURY — The City Council’s vote Tuesday to raise fees for downtown parking violations led to a broader discussion about the city’s efforts to purchase technology that would better enforce and address concerns with parking.

The city contracted with VHB Engineering in 2019 to conduct a parking study across the downtown area. It determined the city has a “perceived” parking problem. City Engineer Wendy Brindle said staff are just now able to implement some of the study’s recommendations — one of which raises the overtime parking fee from $5 to $15. Brindle said the $5 fee hasn’t been raised since 1996 and is much lower than cities comparable to Salisbury. Council members also approved raising the repeat offender fine from $50 to $75. Repeat offenders are those who receive four parking violations within a 30-day period.

At the start of the pandemic, the city suspended parking enforcement. Police Chief Jerry Stokes said SPD currently has a non-sworn employee working part-time for parking enforcement, but there is currently no technology in place to track repeat offenders. The addition of technology involves a cost and requires resources to enforce parking, including a vehicle, Stokes said.

“This is kind of a first step in trying to move forward and address the concerns of merchants and the parking issues that are accompanying some growth — good growth — in downtown Salisbury,” he said.

The downtown area contains 1,415 public parking spaces within 36 blocks around the Square, with 818 of those unrestricted and 479 limited to two hours. Brindle said parking with a time limit is aimed at downtown merchants, employees and those who plan to be downtown all day, while two-hour parking is targeted for patrons. Additionally, there are 24 parking spaces reserved for Sunday-only parking and 94 weekend/juror parking spaces.

The parking study from 2019 showed an average violation rate of nearly 15% for two-hour parking spaces. Church, Liberty and Bank streets saw the most violations.

But Brindle noted more parking spaces have been added downtown following a visit from North Carolina Department of Transportation to restripe downtown as part of the larger Downtown Main Street plan approved by City Council earlier this year. Around 86 spaces were added, Brindle said, with 13 spaces added from Horah to Monroe streets, which previously had no parking spaces. Those additional spaces are unrestricted, she added.

Council member David Post said raising these fees and addressing parking is “overdue,” and expressed concern in particular for parking near the courthouse because those attending court can’t always meet the two-hour limit during proceedings. Council member Anthony Smith said he’s talked with merchants who say they have to relocate their vehicle every two hours.

Stokes said such instances can be a “depends on who you ask” scenario, particularly because, by contrast, some merchants say their parking is taken up by those attending court. SPD currently has no way of determining why vehicles are parked, just where the violations are occurring, he added.

Interim Manager Brian Hiatt asked Stokes to provide the City Council with a rough estimate of how much needed technology would cost so it could be considered in upcoming budget discussions.

Currently, vehicles are marked with chalk if they’re in violation. Brindle said she’s personally witnessed individuals remove the chalk and remain parked, so it’s a concern that must be resolved using electronic means not currently in place.

Council member Harry McLaughlin Jr. asked about issuing parking permits for merchants and residents, but Brindle said past discussions reveal many aren’t in favor of that because it could take away parking for patrons.

The prior parking study also showed a usage rate of about 85% for the downtown area’s two-hour parking spaces located between Innes and North Lee streets. By contrast, the free parking lot behind Salisbury City Hall, located at 217 S Main St., only saw a 31% usage rate, along with a 16% usage rate for free parking on Depot Street. Brindle and Stokes said the city, and particularly Downtown Salisbury Inc., tries to encourage merchants to utilize free parking, even if it means parking farther away from their businesses. Additionally, there is also paid parking available to those who don’t mind paying for parking and reserving premium parking for patrons.

Brindle said a parking deck is mentioned in the study and that it’s recommended to be implemented in a public-private partnership model or as an effort among governmental entities. However, no location has been identified that would “meet the perceived needs of every individual,” Brindle said, but those discussions are ongoing.