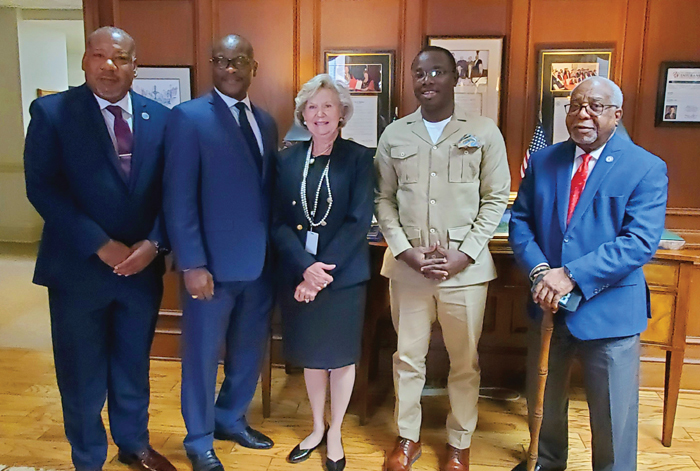 SALISBURY — Following visits from Liberian dignitaries in the fall, the Salisbury City Council on Tuesday formally established a sister city relationship with the city of Monrovia in the African Republic of Liberia.

Discussions about the relationship began in October following a news conference at Livingstone College, where the school granted Emmanuel Tuloe, a teenager from Liberia, a full scholarship. Tuloe became a national hero after he returned tens of thousands of dollars to the rightful owner.

Tuloe, 18, was driving his motorcycle taxi in northeastern Nimba County in Liberia when he discovered $50,000 in U.S. currency and 100,000 Liberian Dollars wrapped in a plastic bag on the road. Tuloe’s aunt held onto the money until he was able to return it to Musu Yancy, a business owner who made a request to return the money over the radio later that day. Christopher Fahn, a reporter in Liberia, first reported the story.

Tuloe’s story gained international attention, with President of the Republic of Liberia George Manneh Weah visiting Tuloe at his home. Tuloe told Weah his desire was to finish his education after having to drop out in the seventh grade to operate a motorcycle taxi service to support his family. Weah and his family personally offered a scholarship for Tuloe to attend any school of his choice in Liberia, along with $10,000 and two new motorcycles. The owner of the money also provided Tuloe with cash and materials valued at $1,500, including a mattress he gave to his grandmother.

Tuloe plans to complete high school before enrolling in college in Salisbury, but Livingstone’s offer is good whenever he’s ready. Tuloe said he plans to study engineering.

Following the news conference, Mayor Karen Alexander started a discussion with George S.W. Patten Sr., the Liberian ambassador to the U.S., about potentially establishing a sister city relationship due to the success of the city’s relationship with Salisbury, England.

“I wanted this sister city relationship to be economic as well due to Livingstone’s partnership with the city of Salisbury through KIVA and the 1MBB program,” Alexander said.

KIVA is a nonprofit organization that provides loans to eligible women- and minority-owned businesses. 1MBB, or 1 Million Black Businesses Initiative, aims to give one million Black entrepreneurs and small business owners the tools they need to succeed. Salisbury is a participant in both initiatives.

“This is a great opportunity for us to advance not only the cultural, but our commitment as a city for racial equity and inclusion,” Alexander said. “This could be the beginning of something really big.”

In November, Liberian officials returned to Salisbury to discuss the relationship and craft a memorandum of understanding between the two governments. Alexander was joined by Patten, Monrovia Mayor Jefferson Koijee, Livingstone COO Dr. Anthony Davis, Executive Assistant to the President Dr. State Alexander as well as James Hunder and Olu Browne of the Winston-Salem-based Liberian Organization of the Piedmont.

Koijee credited Alexander with taking “the bull by the horn to move forward.”

America’s relationship with the West African nation of Liberia dates back to the 19th century. In the early 1800s, the American Colonization Society founded the colony of Liberia south of Sierra Leone as a homeland for freed U.S. slaves outside of British jurisdiction. Monrovia was named after America’s fifth president, James Monroe.

During Tuesday’s City Council meeting, councilman Anthony Smith said the new relationship was “fascinating,” and that Liberia is on his bucket list to visit based on the history and culture. He added that Liberia’s flag is similar to the U.S. flag. Councilman Harry McLaughlin Jr. said he’s interacted with some local Liberian nationals who come into the store and is noticing a growing population.

“There’s a small community that’s actually growing here in Salisbury and a number of individuals who come to shop and get the same type of meats we do,” McLaughlin said. “Their language is English … and the currency is the U.S. dollar.”

Liberia anticipates celebrating its bicentennial throughout 2022. Alexander said Tuesday she plans to visit the country and will pay for her travel expenses.

Davis, who represented Livingstone President Jimmy Jenkins Sr. during the November meeting, credited Alexander’s leadership and inclusiveness, which he said was the “spirit in which this document was drafted.”

“It goes beyond just a cultural experience, but perhaps an economic experience — a relationship that would be mutually beneficial,” Davis said.