SALISBURY — Verizon wireless customers near Faith can anticipate stronger cell service after the Rowan County Board of Commissioners on Monday afternoon approved the construction of a cell tower southwest of the town.

The cellular company plans on constructing a 165-foot-tall tower on a 24-acre tract of land owned by Debbie Craddock and Patricia Moore at 280 Rimer Road.

The tower will help Verizon address a “significant gap in coverage” and help improve capacity primarily west of Faith Road, north of U.S. 152 East and east of Old Concord Road. That area is currently served by Verizon’s Granite site. In a memo to Rowan County planning staff, a Verizon Wireless engineer said the new tower is needed to “meet the growing needs of Verizon Wireless customers in the Mount Hope Area.” 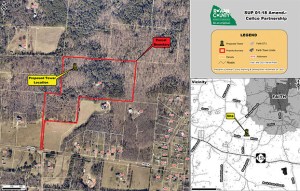 A map prepared by Rowan County Planning depicts the location of the 165-foot-tall Verizon cell tower being planned on a 24-acre parcel of land southwest of Faith.

The Board of Commissioners approved a nearly identical permit in 2018, but Verizon did not move forward with construction of the cell tower before the permit expired. It is unclear why Verizon did not build the tower at that time.

The company decided to construct a new tower at 280 Rimer Road because no other existing towers or other tall structures in the area would accommodate an antennae. The new tower is designed to accommodate additional cellular carriers as well.

CityScape Consultants reviewed the application for the cell tower and determined that it meets all of Rowan County’s requirements.

Although the tower now has a stamp of approval, Verizon customers in Faith shouldn’t expect immediate improvement in their service. The attorney representing Verizon during the Board of Commissioners meeting said  cell tower projects take some time to complete.

• The board approved a special use permit to allow Russel Woolf and Danielle Soroka to build a 2,400-square-foot residential storage facility on a parcel of land diagonally across from their home in the Water’s Edge neighborhood near High Rock Lake. Even with the board’s approval, Woolf and Soroka must have the building approved by the neighborhood’s Homeowners Association. Aaron Poplin, county planner, told commissioners that nearby neighbors have expressed concern about the building materials, but not the building itself. Woolf said the HOA has several issues with the building and that he is attempting to work through them.

Littering North Carolina roadways is illegal and can result in fines for those that commit the offense. The public can report those who litter to NCDOT’s Litter Management Section by filling out an on-line form or calling NCDOT Litter Management at 1-800-331-5864.

• Commissioners re-appointed Greg Anderson and Tim Proper to the Rowan Economic Development Council’s Board of Directors and appointed Rowan-Salisbury Schools Superintendent Tony Watlington to fill a vacant seat on the board. Each of their terms will expire on Dec. 31, 2024. The Rowan EDC’s Board of Directors serves to oversee the organization’s duty of facilitating business retention and growth in Rowan County.

• The board approved extending premium pay for first responders who either are or may be in direct contact with a person infected with COVID-19 until June 25. The board initially approved premium pay in August from Aug. 8 to Jan. 8, which included a per-pay-period amount of $153.20 for full-time employees and 10% for part-time employees. The premium pay applied to job titles in the Rowan County Sheriff’s Office and Emergency Services division.

• Commissioners approved an amendment to an incentive grant with Hexagon Agility to delay the start of the grant period. The company in March announced an expansion of its Salisbury facility that would create 75 new jobs and result in an investment of $28 million. The company’s plans to install new equipment and expand their 204,000-square-foot facility by 113,000 square feet as part of the project.

Hexagon originally estimated a substantial portion of the project to be completed by the end of 2021, but availability of materials are causing substantial delays for the project. Hexagon now estimates a substantial completion date of Dec. 31, 2023. The grant, which will have  Rowan County return 75% of the company’s paid taxes over a five-year period, will now start in fiscal year 2024-25.

• Following the public meeting, the board met in a closed session for approximately an hour. The board took no action after the closed session.