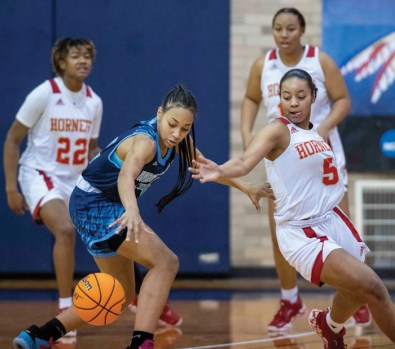 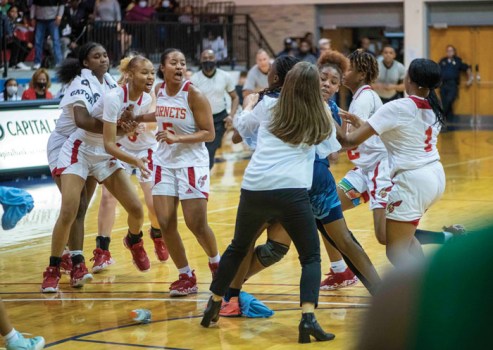 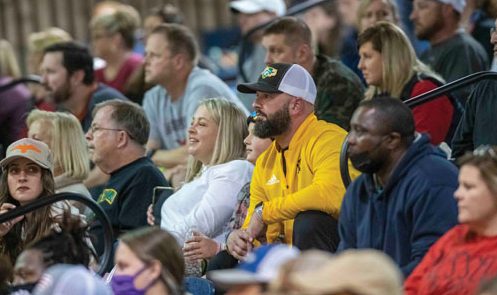 Jason Causby, coach of the No. 1 seeded North Rowan boys team (in yellow), watches the game between the fourth seed West Rowan team and fifth seed East Rowan team in the opening round of the Sam Moir Christmas Classic at Catawba College. JON C LAKEY / FOR THE SALISBURY POST. 12/28/21, Salisbury,NC.

In other words, life moves forward for basketball coaches, teams and fans after a traumatic and terrifying Wednesday night that could mean the end of the Christmas tournament, a staple of Rowan County sports for 50 years.

That more people weren’t seriously injured — or killed — at Catawba’s Goodman Gym was nothing short of a miracle. The danger from the bullets that flew — one traversed the length of the crowded lobby but somehow didn’t strike anyone — was very real, but the panic and the stampede the gunfire created were potentially far deadlier.

The final girls game played on Wednesday night — a West Rowan-Salisbury semifinal — did not end well. The contest was ferocious, hotly contested, another tough, defensive-minded Salisbury victory, as the Hornets, seeking their first tournament trophy since 2016, earned their way into the championship game.

Players from both teams controlled themselves during the game and were even gracious in the handshake line, but there were words and shoves as they made their way to the locker rooms. It took officials quite a while to sort things out after that brief melee, delaying the start of the West-North Rowan boys semifinal.

When they did make it on to the floor, those teams staged an exciting first half, battling to determine who would oppose Salisbury in Thursday night’s championship game, which would have been played in front of a packed house.

At halftime, deep in the basement of Goodman Gym, Causby and his assistants met outside the North locker room, as is their custom, before entering the room to address the team.

“We were in stairwell talking about adjustments for three or four minutes,” Causby said. “I knew we only had about six minutes left before we had to be back on the floor, so I felt sort of rushed. I was drawing up a few tweaks on the blackboard when I heard screams, what sounded like a stampede, basically panic. Given the fact that our locker room is under the playing floor, it got really loud overhead. I looked at the ceiling and knew something was wrong.  One of the coaches suggested that maybe it was just the cheerleaders doing their halftime routine, but I knew it didn’t feel right. I looked at (assistant coach) Nick Means, and he was taking off out the door. All I could think of in that moment was that my family was up there. My wife would be at the scorer’s table because she keeps our book. My three kids were in the stands or in the concession area, and I’m thinking about them getting trampled if people are fighting and shooting.”

When Causby headed for the stairs, Means already was bringing down Means’ daughter and Causby’s youngest son, Griggs. They had taken off running for the North locker room, as soon as they heard the shots.

“Nick said people are shooting, don’t go up there,” Causby said. “But my wife is up there.”

As he started making his way up the stairs, Causby was greeted by waves of panicked, screaming, crying fans, headed in the other direction.

“I’m telling people as I run past them that there’s an emergency exit at the bottom of the stairs,” Causby said. “But now I’m starting to panic myself because I can’t even get up the stairs due to the sheer amount of people fleeing the gym. I’m trying to fight up the stairs and by the grace of God, I see my daughter, Jaysa, and she’s shaken up like everyone else, but she’s OK. I took her down to the locker room and pushed her in and told her to stay put. Our assistant coaches did a great job of keeping our players in the locker room and even bringing in kids that could not find their parents in all the confusion.”

Causby finally made it up the stairs and into the gym. That’s when he found his wife and older son.

“Grey had been at the concession stand, less than 10 feet away from the fight,” Causby said. “When he saw the guns come out, he ran into the gym, looking for his mother at the scorer’s table. She was getting ready to run herself when she saw waves of people coming at her. She grabbed Grey and they got under the scorer’s table.”

Causby finally got his wife and son to the North locker room. He was getting ready to go back up to the gym on one more mission — to account for his mother, mother-in-law and father-in-law — when he saw all three coming down the stairs.

“We ended up with all kinds of people in our locker room, people from Novant, athletic trainers, former players, cheerleaders, kids and parents,” Causby said. “It was unlike anything I have seen before, but a lot of people really banded together. We helped young people find their parents. We walked people out to their cars once we were cleared to leave.”

West Rowan boys coach Mike Gurley’s wife was at the concession stand and was knocked over by the stampede. A youthful member of Gurley’s family was at the stand and was grabbed by Catawba assistant football coach Tim Pangburn, a West Rowan grad, and stuffed in a ball closet to keep him out of the panic.

Around 8 p.m. on Wednesday, Salisbury seniors Rachel McCullough and Jaleiah Gibson talked about how much winning their first Christmas tournament would mean to them.

Those dreams were gone an hour later.

“A mix of emotions,” McCullough said on social media. “I’m thankful we won and I got to be on the court with the best team and coaches. We’re always champions in my book, and no one’s going to take that away from us. But all of a sudden, it became one of the most frightening days of my life. I’m truly disappointed that this moment we’ve been working towards was depleted. But, my heart goes out to those who were there. I’m proud of our community and how we came together in that gym after shots rang out. The Sam Moir Christmas Tournament lives on forever with me.”

Wednesday’s madness gradually gave way to Thursday’s sadness, a day without championship games not only for the North/West winner, but for the Salisbury boys, who had earned their way into the finals with a scintillating, first-half performance against Davie County. Also denied a chance to hug a trophy were the Carson and Salisbury girls, who once again were detoured from a collision on the biggest stage. COVID prevented a probable Carson-Salisbury championship matchup in 2020.

“Hate that we cannot play in our championship game, but we control what we are able to control,” Carson coach Brooke Stouder said. “So we practiced on Thursday, filled our bellies, and enjoyed each other. Looking forward to starting off 2022 well.”

“I hate it, especially for my seniors who have worked so hard for this moment, but now we have to get ready for conference play,” Salisbury girls coach Lakai Brice said.

West Rowan’s boys celebrated on Thursday with a team meal.

“Although we are the West Rowan Falcons, we were temporarily the West Rowan Phoenixes on Thursday, rising out of the ashes of Wednesday’s insanity,” Gurley said. “Strong, together, unafraid, tougher. Bring on 2022.”

There won’t be any Rowan home games this week. Scheduled home games will either be played on the road or postponed.

The key boys game is West Rowan at Lake Norman Charter. Both are among the better teams in the SPC, where seven squads appear to be playing for second place behind a Central Cabarrus juggernaut that may be 3A’s best. West Rowan was scheduled to host Central Cabarrus on Friday, but those games will now be played at Central

The key girls game for Tuesday is Carson at Northwest Cabarrus. That’s a tough place to play, but if Carson can win there, the Cougars are the team to beat in the conference. West’s girls beat Northwest Cabarrus in Mount Ulla to hand the Trojans their first loss, but Northwest traditionally is a different team at home than on the road.

Salisbury returns to the floor for Central Carolina Conference play on Wednesday at East Davidson. Neither Salisbury team should have any trouble there.

North Rowan was scheduled to play at home against South Stanly on Tuesday. That’s non-conference. No word yet on whether that one will be canceled or played at South Stanly.

All the Rowan teams will look to put Wednesday night behind them and enjoy as normal a season as possible.

But it won’t be easy.

It’s certainly possible that the ban on home games will last past this week.

“It was a crazy and unfortunate scene on Wednesday,” Causby said. “It’s sad that a tournament that has been so good to players, coaches and fans for so long has been ruined by a senseless act. I have so many fond memories of the tournament as a player, coach and fan, and I’m disappointed that this is what my family takes with them. When you can’t attend a high school sporting event without fearing for your family, it’s a sad day for Rowan County.”