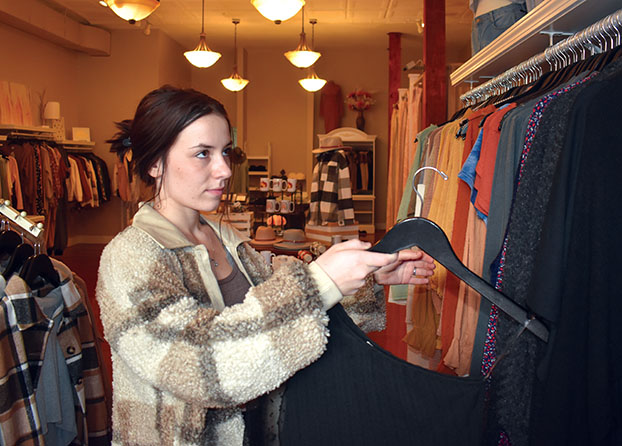 SALISBURY — Walking through downtown stores in the days leading up to Christmas, Lesleigh Drye was encouraged by what she saw.

“It felt good,” Drye said. “I felt like every store I went in had people and it was very refreshing to see people out and enjoying downtown.”

Drye is the co-owner of Caniche, a boutique and gift shop located at 200 S. Main St. that sells clothing, accessories, candles, speakers and miscellaneous merchandise. Like several other downtown business owners, Drye is on the tail end of what she described as a “great” holiday shopping season.

Drye isn’t the only downtown shop owner who had a promising season. Dennis Lunsford, the owner of Kitchen Store at 106 N. Main St., was also pleased by his shop’s December sales.

“We had a really strong Christmas, which we seem to always do because we’re a Christmas-type store,” Lunsford said.

Lunsford attributes the strong holiday season in part to consumers having more funding to spend on gifts.

“There was plenty of disposable income and people were definitely spending it,” Lunsford said.

Drye credits the strong shopping season with consumers feeling safer than they did in 2020, when more people were still staying at home and shopping online before a COVID-19 vaccine was widely available.

“I think people are just in a better place and I think a lot of people, at least the people who come in here and are comfortable coming in here, are vaccinated and feel pretty safe,” Drye said.

Emily Pangle, manager for 3 jem’s boutique at ​​102 S. Main St., said the store continued to see its online presence and sales flourish during the holiday season. However, she also observed a noticeable uptick in foot traffic in both the boutique’s Salisbury and Kannapolis stores in the weeks leading up to Christmas.

Consumer comfortability and more disposable income are some of the reasons why accounting firm and professional services company Deloitte forecasted a 7% to 9% increase in 2021 holiday sales compared with the same period in 2020.

Bob Potter, who owns and operates Salisbury Wine Shop with wife Stephanie, saw a jump in his Christmas numbers this year as people hosted larger gatherings again. Potter said sales were up 15% in December from December 2020.

“Definitely there are a lot of people out there trying to buy local,” Lunsford said. “I’ve noticed it more so the last few years than before that.”

Pangle noticed a similar sentiment among customers at 3 jem’s.

Other trends emerged or continued this holiday season, including customers shopping earlier.

That was due to the fact that 75% of consumers surveyed were concerned about stockouts and shipping delays, thus motivating them to start their shopping earlier.

“I did feel like people shopped earlier,” Drye said. “That was maybe media imposed, which was legit. I had more vendors tell me this year than ever that there would not be re-orders, so I think people were listening and tried to shop a little bit earlier.”

Drye said it was a constant battle to keep up with which of her orders would arrive in time for the shopping season and which orders would be jammed up at the ports.

“I heard 1,000 times that it was either on a ship, at the port, but the supply chain issues were real,” Drye said.

Lunsford was fighting a similar battle. Expecting some of his typical vendors to be running low on merchandise, Lunsford started ordering earlier this year.

“In June, I was scrambling and looking for different vendors to buy from,” Lunsford said. “Everybody knew what was going to happen and it makes it work when every sales rep tells you you they’re going to run out.”

Pangle said 3 jem’s also dealt with backorders and clothes being out of stock, but was able to navigate the issues without too much hassle. The store, she said, is used to staying nimble because it introduces new apparel on a weekly basis.

Despite the challenges of keeping shelves stocked, downtown business owners said they are pleased and grateful for the success they experienced over the last several weeks.

“I wouldn’t be in business without a real strong Christmas,” Lunsford said. “I wouldn’t be here. And that probably goes for a lot of retail stores. If you can’t hit a homerun during Christmas, it’s not going to happen for you.”

Potter said the holiday shopping season is by far the busiest time of the year for Salisbury Wine Shop.

“For us, we will do almost three months worth of business in the month of December,” Potter said.

A successful end to 2021 has downtown shop owner’s optimistic heading into the new year.

Potter said he expects Salisbury Wine Shop to continue to stay busy through February, which is typical because of Valentine’s Day business. The shop will also be hosting several tasting events in the near future to expose customers to new types of wine.