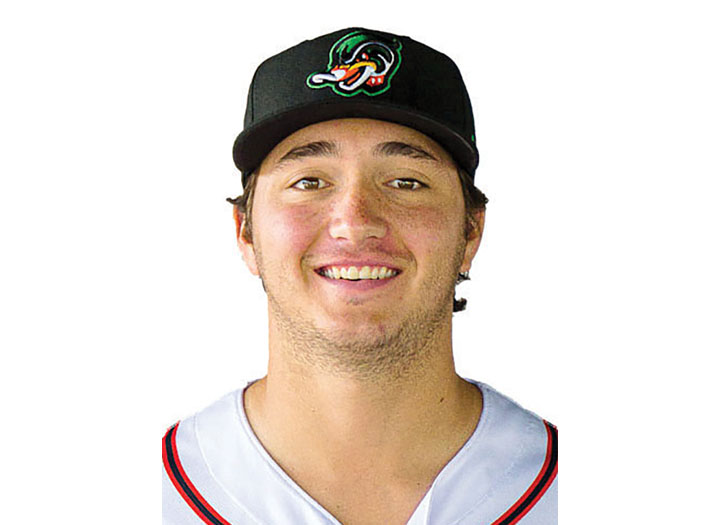 A week ago, fast-rising pitching prospect Owen White got engaged to Madison Barnhardt, his high school sweetheart in their days at Jesse Carson High.

It’s nice to have a fianceé to help with those tough 10 To Watch questions.

Asked who would play the lead in the potential blockbuster movie, “The Owen White Story,” White was stumped for about 20 seconds, but Barnhardt rescued him.

She didn’t pick one of the musclebound mighty Avengers. She ignored the tuxedo-clad secret agents. She said no thanks to the mustachioed men who play the macho cops and infallible surgeons on television.

“It would be, uh, … Jim Carrey or Adam Sandler,” White answered sheepishly after conferring with the lady who is scheduled to officially become his better half next Dec. 10.

That means “The Owen White Story,” will be a comedy, playing for laughs.

It’s cool that the uber-talented White doesn’t take himself too seriously off the baseball field. Neither does his betrothed, who showed major hops for Carson volleyball and displayed an arm almost as good as White’s when she was Carson softball’s center fielder. They both prefer slapstick to being sticks in the mud.

He made the quantum leap from question mark to hot prospect. He soared from a guy the Texas Rangers were hoping might help them down the road to a stud they’re counting on to take the ball as a member of the starting rotation in the near future.

With monster performances over the final five weeks of the Minor League season and in the Arizona Fall League, White attracted attention from nationally respected scouts and analysts. He blew up in a number of ways. The cost of a handful of White’s bubble gum cards went from pennies to dollars.

“The last few months were awesome,” the 6-foot-3 right-hander said. “Because I felt like for a long time I was letting my teammates down, letting the Rangers down, letting everyone down. I did finally get healthy, and that had to be the biggest part of it, but I also got stronger mentally because of some of the things that have happened to me. I hurt myself with one of those mental things back in the spring in Kannapolis, but I tried to learn from it and grow from it.”

He was the All-American teenager after he graduated from high school in 2018, an athlete who had run the option and drilled 3-pointers for Cougar athletics. On the baseball field, he was a two-way terror like no one the Cougars had ever had, firing no-hitters for coach Chris Cauble, piling up strikeouts, fielding everything at shortstop when he didn’t pitch, and smacking line drives off distant fences.

White was a two-time Darrell Misenheimer Award winner as Rowan County Male Athlete of the Year. As a senior, he was Gatorade Baseball Player of the Year for North Carolina. He had committed to the University of South Carolina, but he was a second-round draft pick, commanding a signing bonus as pick No. 55 of $1.5 million. That was enough incentive to pass on college baseball and get his pro career started.

That’s where things veered off course. White didn’t make his pro debut in the summer of 2019. The Rangers were thinking outside the box, trying to save wear and tear on their young hurlers. So White went to classes, learning Spanish, learning to cook, learning nutrition, learning to chart pitches. Most of his physical activity was lifting weights. He threw very little.

Despite all the precautions and the best of intentions, White injured his right elbow before he ever pitched in a minor league game. “Tommy John” surgery in 2019 meant missing that entire season.

Then the pandemic wiped out all of minor league baseball in 2020.

When White finally made his official minor league debut in May 2021 as a member of the Kinston-based Down East Wood Ducks, it was in, of all places, Kannapolis, against the Cannon Ballers. Kannapolis is about eight miles from Carson — maybe 15 miles from the house where White grew up.

It was a storybook setting, well-attended by local fans. White started out OK, but, in an instant of frustration, he slammed the ground with his right hand after making an errant throw to the plate. He kept pitching, but the hand was broken. That meant three more months on the shelf for a guy who has been on the shelf way too much.

When he finally was cleared to returned to Kinston in August, he was throwing 97 mph fastballs, and his slider and curve were even tougher to hit. In his last three starts, White struck out 33, while walking two The Rangers let him go a little longer each time out.

After the playoffs, the Rangers wanted to see if that fantastic finish to the minor league season was for real — and assigned White to the Arizona Fall League. They wanted to challenge him.

In the Arizona Fall League, a hitter-friendly league for top prospects, a league where many pitchers got their egos destroyed, White dominated. He was acclaimed as the best guy there — 5-0 in six starts, with a 1.91 ERA. He was named the league’s Pitcher of the Year. Just about everyone with a laptop wrote a story about the kid who had come out of nowhere.

So now White is once again one of the 10 To Watch.

Assuming the pro baseball season can start on schedule, White is expected to open the 2022 season in Double A. That’s two steps up from the Wood Ducks, but it’s a jump the Rangers are confident he can make.

Steak and potatoes. That will never change.

Make someone smile every day.

Leiter could be a future teammate with the Rangers. A stud pitcher at Vanderbilt University, Leiter was the second overall pick in the 2021 draft.

Buy a ranch big enough for the whole family to come and visit.

I am honored and humbled. Glory to God for all the wonderful things that have happened to me this year.