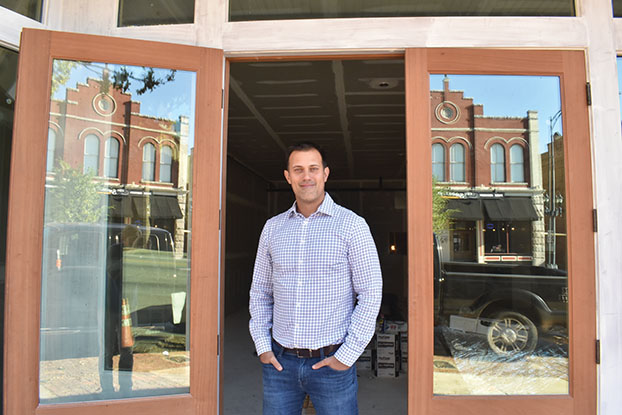 Josh Barnhardt has managed the complex renovation project to prepare the building for Barnhardt Jewelers, the company run by his mother Debbie that is relocating to downtown Salisbury from Spencer. Ben Stansell/Salisbury Post

SALISBURY — Josh Barnhardt isn’t afraid to take on a project.

In 2020, the 42-year-old Rowan County native renovated a building downtown to house his family’s jewelry business and two apartments on the second floor.

“I’ve had several careers, but none of which have been more satisfying than bringing back the original beauty of these historic buildings,” Barnhardt said.

Barnhardt followed that endeavor in 2021 by announcing plans to remake another historic structure: “The Salisbury” building, which is located at 121 W. Council St. and was constructed by the Southern Bell telephone company in the 1920s. The three-story building with an extensive basement was home to various offices before Barnhardt and his Ironhorse Development team purchased it.

Barnhardt and his team will transform “The Salisbury” into an apartment building and climate-controlled storage. There will be six one bedroom and six two bedroom units varying in size from 650 to 1,100 square feet. Four units will be on each floor. If everything goes according to schedule, Barnhardt said he expects to have the 12 units ready by the end of the summer.

Barnahrdt said he’s enjoyed seeing the building return to its natural state as contractors have started to gut the interior.

“Peeling back the layers of it is by far the most exciting part of the process,” Barnhardt said. “It’s been amazing to watch demolition that revealed the original 14-foot ceilings from the 1920s.”

The plan is to accentuate the building’s art deco style with furnishing and interior design. Barnhardt has teamed up with Carrie Frye Interior Design of Charlotte to bring that goal to fruition.

Anticipating supply-chain delays, Barnhardt said he has already ordered the plumbing, appliances and HVAC materials needed to complete the renovation.

Barnhardt is counting on the apartments to draw interest from people who want a quieter slice of downtown living that’s not far from Bell Tower Green or the square.

“One unit has already rented with several showings coming in early January,” Barnhardt said. “The strong demand has been a mix of younger and ‘more experienced’ folks from the community.”

“The Salisbury” won’t demand all of Barnhardt’s attention. He’s also been asked by Brett Krueger to help bring the Empire redevelopment to fruition. Outside of downtown, Barnhardt is an investor in the Grants Landing housing development. In Cabarrus County, Barnhardt will be working on another historic project in downtown Concord.

My friends joke how much I favor an odd European children’s character, Robbie Rotten, so obviously it must be him.

Cheese pizza and spaghetti with my kiddos. It’s their favorite. Therefore it also must be my favorite.

That the entire community (individuals, F&M, companies, city/county, etc.) rallies around the transformative project that the Empire project could be for downtown. It’s going to take all of us working together (not just money) and a lot of trust to move this long-awaited project forward!

The new Salisbury City Council, given the new faces on council. I think there’s a good mix of folks, hopefully they’ll be able to work together to drive progress for Salisbury and avoid the politics that plague the state/national level.

Build a parking deck in downtown Salisbury. I joke, but I don’t play the lottery. So, if I won $10 million it would have to be a mistake. So, I would give it away!

What’s your reaction to being named as one of the 10 to Watch?

Honored for sure. It’s an absolute passion to renovate these amazing historic buildings, so if that brings about recognition, it’s appreciated but not expected.