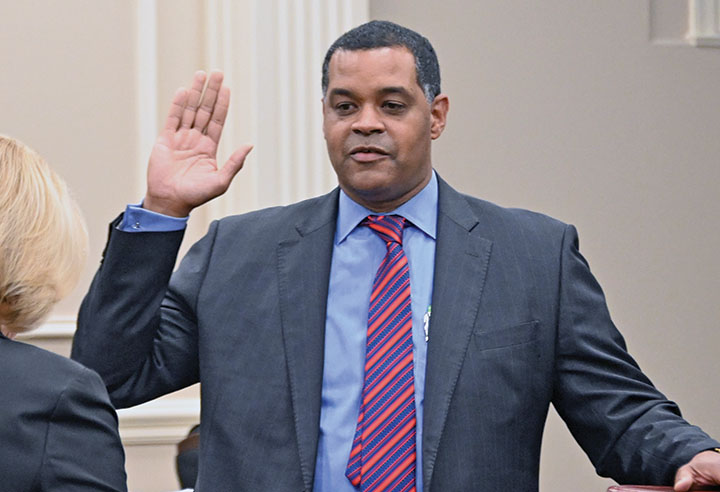 SALISBURY — Before 2021, Harry McLaughlin Jr. might have only been known as the owner of McLaughlin’s Grocery, a landmark of the West End community.

As a political newcomer in the 2021 municipal election, he received the second-most votes for Salisbury City Council and joined Rev. Anthony Smith to mark the first time the City Council has had two people of color serving at once.

McLaughlin is the owner of McLaughlin’s Grocery on West Monroe Street. He became the owner in 2017 after a 15-year career as a member of the U.S. Secret Service, where he protected presidents, vice presidents, foreign heads of state and their families. During that tenure, he also investigated financial crimes and led computer forensic operations.

A big reason McLaughlin decided to run for Salisbury City Council was often hearing a concerns from customers at the store who didn’t seem to know about all the resources available to them in Salisbury. McLaughlin said he felt he could help bridge that gap and help inform and connect residents to the city’s resources.

Concerns about public safety and crime were often the most pressing issues both council candidates and voters indicated should be addressed by the new council. Throughout the campaign, McLaughlin maintained that as the only candidate who’s taken out search warrants, investigated crimes and pulled a gun, his experience can make a difference in bridging the gap between the community and law enforcement and working to reduce crime.

McLaughlin said during the campaign there needs to be an increased visibility of officers throughout the community to establish trust, which is something he witnessed happening in his own store when an officer continued his presence there. In doing so, more people feel comfortable reporting small, petty crimes that might lead to bigger and more serious crimes, he said.

After his retirement from the Secret Service, McLaughlin said he had grown tired of the divisiveness of party politics and changed his political party to “unaffiliated.” When polls closed on Nov. 2, McLaughlin received the second-most votes — 2,620 — behind incumbent Tamara Sheffield, who received 2,918 votes. After his victory, McLaughlin reiterated that he didn’t run as a Republican or a Democrat. Instead, he ran “as a candidate for all people” because his campaign was about bringing people together.

On Dec. 7, McLaughlin was sworn in to another historic Salisbury City Council. He and Smith, both Black men, mark the first time the city has elected two people of color to serve at once. Additionally, the new council unanimously voted to appoint Sheffield as mayor pro tem, which was another first because she is the first openly gay woman to serve as mayor pro tem.

McLaughlin and his wife live in Salisbury and have a blended family together.

Since the movie “Man on Fire” featuring Denzel Washington came out in 2004, people have made the comment that I looked like him. If that is the case, I would have him to play me in a movie.

My biggest personal hope for 2022 would be for us to emerge from the pandemic mentally and physically healthy with a sense of rejuvenation for a brighter future.

My biggest challenge for 2022 is to reinvent a sustainable business model for my store to mitigate any future pandemic or business disruption — a model that could be applicable to other small businesses.

The person who I will be watching is the person who will be watching me, my brother. My younger brother, Brian McLaughlin, has been supportive prior to my decision to run for a city council seat, and he has been supportive during the campaign. He is president and CEO of one of the top six nonprofit organizations, and he has recently been elected to serve as a public interest independent director to the Federal Home Loan Bank of Atlanta. His work habits prevent me from being complacent in my endeavors and continue to challenge me to be and do better for others.

If I won $10 million, I would pay for a family trip to a place where cellphones don’t work. A weeklong trip is about how long we could take before my wife and I would need to worry about the kids plotting a revolt. Then I would use the money to help fund a community life center that brings diversity to communities of all ages and demographics in an effort to teach developmental life skills, financial responsibility/sustainability and to allow creative innovation. In addition, it would have outreach programs for a variety of social awareness.

My reaction to being one of the Post’s top 10 was a feeling of honor, appreciation and humility. The nomination has encouraged my desire to make Salisbury a great city to live and raise a family.