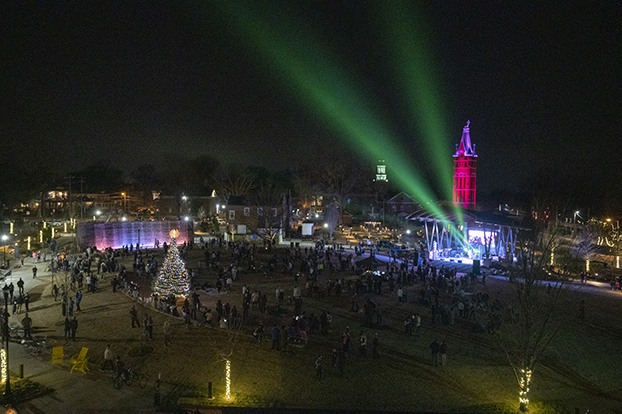 SALISBURY — The city rang in a new year at Bell Tower Green Park on Friday, bringing back a tradition put on hold for construction and a pandemic.

In 2020, there were no large New Year’s Eve celebrations to be found. In 2019, festivities were moved to the F&M Bank Trolley Barn because the area set to become Bell Tower Green was a construction site. Now, with a new park and almost two years of the pandemic under the city’s belt, Salisbury brought back the tradition of ringing the bell in the Bell Tower.

Local band Divided by Four took to the stage at the new park for a three-hour set that turned the area in front of the amphitheater into a dance floor. Meanwhile, city staff poured 120 bottles of sparkling grape juice into cups to give folks something to toast with when midnight arrived.

As the clock approached 2022, the show changed to a live viewing of ABC’s annual New Year’s Eve show as the ball dropped in Times Square. Afterward, a long line formed to ring the bell at the Bell Tower.

Jason Young grew up two blocks from the park and walked to the tower most years for the tradition.

Young and his family bought a house on Fulton Street this summer. So, he walks in the park frequently. When the grand opening for the park was canceled, it was disappointing, but he enjoys the facility and thinks the pandemic may be driving people to it.

“There are kids out here a lot, even 10 o’clock at night you’ve got parents out here with their kids,” Young said. “You wouldn’t have seen that before COVID, I don’t think.”

Young said his son is going off to college soon. One of his hopes for 2022 is he picks a good school.

Andrew Strahan took a longer trip to the park on Friday. Originally from Australia, he lives in Seattle. Strahan was visiting Salisbury with his wife, who grew up here.

He was brought into the tradition of New Year’s Eve at the Bell Tower because it was something his wife’s family did every year. He was impressed with the park as well.

“It’s great. It’s beautiful,” Strahan said. “It feels like I’m not in a small town.”

Strahan said one of his hopes for the new year is for Salisbury to continue to grow.

Megan Simpson, a recreation coordinator with the city, said she is looking forward to the possibility of growing her family in 2022. Professionally, she is excited about the new amenities of the park.

Salisbury Parks and Recreation Event Coordinator Vivian Koontz said she hopes the city can return to some kind of normalcy in 2022.

“Whatever that looks like,” Koontz said. “Coming out tonight with everybody here, this is the way it’s supposed to be.”

Koontz said the previous two years have been devastating to the events industry, and being able to get back to work is exciting.