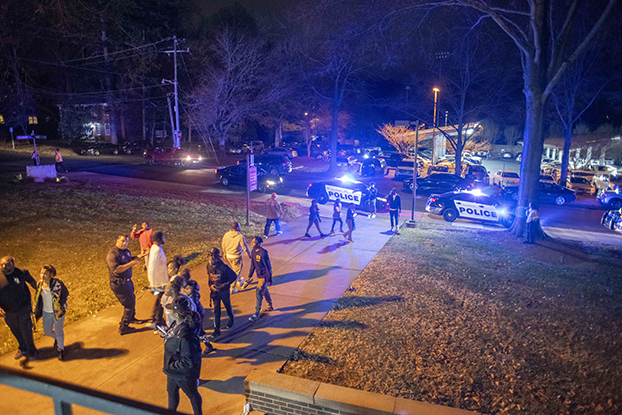 Law enforcement respond to a shots fired with injury at Catawba College on Wednesday evening during the halftime of a high school basketball game. . JON C LAKEY / FOR THE SALISBURY POST. 12/29/21, Salisbury,NC.

Two teenage boys were injured after a fight escalated to a shooting during the semifinal round of the tournament on Catawba College’s campus. The fight happened in the lobby area of the college gymnasium during the half time of a game between North and West Rowan high schools. There were about 400 people in attendance when the shooting occurred.

Hunter said the board intends to do everything it can, and there should be zero tolerance for activity like Wednesday’s shooting.

“I think we all agree that our schools should be safe and parents shouldn’t have to worry when they send their kids to school or school events,” Hunter said.

Salisbury Police Chief Jerry Stokes said there is no indication the incident could bleed into schools, but the department and local agencies are working with schools to ensure the first day back on Tuesday is normal.

Stokes said the department has a good relationship with the district and that school resources officers are the most direct line of communication with the district. The Youth Services Bureau also facilitates discussions with SROs about what is happening on campus.

Watlington said recommendations on the future of the Sam Moir Christmas tournament, the remainder of which was canceled after the shooting, as well as other safety recommendations, will be discussed at the yet-to-be-scheduled Board of Education meeting.

“We talked about several safety enhancements we want to share with the Board of Education, to include lots of options from the feasibility of wanding and metal detectors as appropriate,” Watlington said.

He said school resource officers are present for every athletic contest and the district often has additional law enforcement officers present as well.

The basketball tournament was hosted at Catawba College. The college’s director of communications, Jodi Bailey, said there were no metal detectors at the entrance to the event and the college has never used detectors for its own events. For the Sam Moir tournament, Catawba mostly functions as a lessor rather than a primary organizer.

An email to the campus community from Catawba President David Nelson said the campus is sparsely populated and students who remained on campus through break have been contacted to ensure their safety. The message noted there were Catawba and contractor employees working the event as well as employees and alumni who attended, though none were injured.

“We will implement any necessary measures so that our campus is a safe environment for our students, faculty, and staff, and for guests at Catawba College,” Nelson said in the emailed message. “We will continue to work with our colleagues at Rowan-Salisbury Schools as well as other organizations regarding safety at events held on our campus.”

While much of the discussion among community and school leaders Thursday centered around the immediate future, there was also talk about finding a solution to youth violence in Rowan County.

“I think a broader issue is how are we going to solve the broader issue of — I call them children because I’m a grandmother myself — but young people deciding to resolve any kind of conflict with that method,” Mayor Alexander said. “It’s very concerning. I hope that we can come together as a community and find solutions.”

One solution, Alexander said, could be the creation of a task force to address youth violence.

Stokes mentioned several initiatives already employed by the department that are designed to curb violence, including the Cease Fire program. The program is a joint initiative with the Salisbury-Rowan NAACP and uses data to address gun violence in specific areas of the community.

“We have a ceasefire program that’s going on, let’s buy into it,” Black said. “It’s something that’s already established. Let’s talk about it. People want to react, but ceasefire is there to be proactive.”

Black is also part of a new initiative called Uplift Academy, which is a new youth intervention initiative designed to combat gang culture, influence and recruitment in local schools. The organization was founded recently and is planning to soon host a retreat to show at-risk youth the possibilities that exist outside of violence and criminal activity.

“We would just say, parents … parents be parents and lead your children,” Edds said. “Fathers be fathers and lead your children. We have to show leadership to our kids and let them know this is not how we conduct ourselves. From our positions, there are two ways that we look at this. We ask the parents to do their job, but if they won’t, we have to ask the police to do their job. And that’s what we will do. We will not put up with this kind of activity in our community and in our state and it needs to stop across the nation.”

“This is going to stop,” Edds said. “We’re going to do, as a board of commissioners from a funding perspective, and I know the city folks feel the same way, we will do what we need to do because as elected officials, we really believe our first and foremost calling is to provide for the safety of the folks that live in this community and that’s what we intend to do.”

DeeDee Wright, a member of the Salisbury Police Chief’s Advisory Council, said the solution is dependent on first figuring out the “why.”

“If we can find out the ‘why,’ then we can find the solution,” Wright said. “You can’t continue to throw good money after bad money. Oftentimes kids are not looking for programs. We’ve got to know what’s happening with our kids and why they feel that the only answer is to pick up a gun.”