Principal of the Year Derek DiStefano crusades for competency-based education 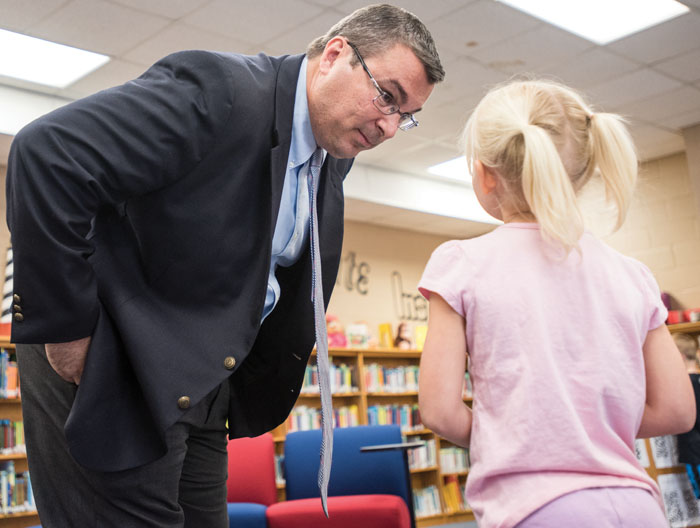 ALLISON LEE ISLEY/SALISBURY POST FILE PHOTO — Principal Derek Distefano of Morgan Elementary School in Gold Hill says one of the biggest problems with traditional grading is an easy way out is to give a student who does not complete work a zero on an assignment.

GOLD HILL – Derek DiStefano has never doubted he is in the right profession.

He says the hardest thing for him was surviving financially as a teacher, but he knew it’s what he was meant to do. He was recognized as the 2021 Rowan-Salisbury Schools’ Principal of the Year for his work at Morgan Elementary School.

DiStefano started his career as an educator in 1997 with Rowan-Salisbury Schools. He went on to work for Charlotte-Mecklenburg Schools and Cabarrus County Schools, but he returned to RSS as the principal at Morgan eight years ago and has been there ever since.

The reason he got into the field is his understanding of how important education is.

“Education is paramount to bettering yourself,” DiStefano said.

He also found early on he loves working with children and wanted to be a driving force for educational improvement. He had multiple extended family members who were educators as well. Growing up, he said the importance of education was impressed on him.

When he was in high school, he was already working with kids — coaching youth sports and tutoring with youth organizations. By the time he left for college, he knew where he was going.

“In high school, working with children, it wasn’t necessarily my goal to be a teacher at the time,” DiStefano said. “But then as I really started to evaluate as it was time to go to college and look at different programs, I really evaluated where my likes and passions lied. I realized I had just spent the past several years working with kids in different capacities and how much I enjoyed that.”

DiStefano has spent his entire career in elementary education. He said his passion lies in developing the foundation kids get in elementary school.

He got into administration because he was looking for ways to broaden his impact. He took on responsibilities as a curriculum coach. In the classroom he felt like he was making a difference, but he wanted to do more.

He has become a leader for competency-based education — a framework the district started exploring framework several years ago. Early in his career, DiStefano realized there were flaws in traditional grading systems, but he wasn’t sure how to address it.

When he arrived at Morgan, he worked on reforming grading practices within the traditional framework, but four years ago former superintendent Lynn Moody asked him to attend a competency-based summit in Colorado. After that, he knew it was the answer to the problems he saw in the first 20 years he spent in the field.

He says competency-based education lets schools personalize learning and gives students ownership of progress. The school’s teacher-led design team fell in love with the framework and began the process of implementing the system Morgan began using this year.

DiStefano said one of the biggest problems with a traditional grading system is an easy way out for educators is to give a student who does not complete work a zero on an assignment.

“A zero doesn’t hold a student accountable,” DiStefano said. “Many times, students are not concerned with a letter or a number grade that you have assigned to their work. A competency-based system ultimately holds kids accountable because they don’t progress to the next topic until they’ve demonstrated mastery for the one they are currently one.”

DiStefano said a competency-based system provides students the time they need to master curriculum standards rather than moving from one topic to the next whether they have mastered a concept or not. Students who are gifted in one area can progress at a faster pace, while students who need more support can work on material without being left behind.

DiStefano says Morgan Elementary has been successful getting its system rolling this year because the school’s staff has bought in and worked hard on the implementation.

“If I’m going to develop a new program here, it’s really important the people who will be implementing it be included in the development,” he said. “The teachers here have really taken the reins.”

He wants to see the district move entirely into a competency-based system and the state to consider it as well. Representatives from another district are coming to look at what Morgan is doing in January.

DiStefano said some parents are skeptical. They wonder why schools would want to do something different when school worked for them.

“When they hear the theory behind a competency-based system and how it will impact their child’s education, regardless of their abilities, they quickly come onboard,” he said.