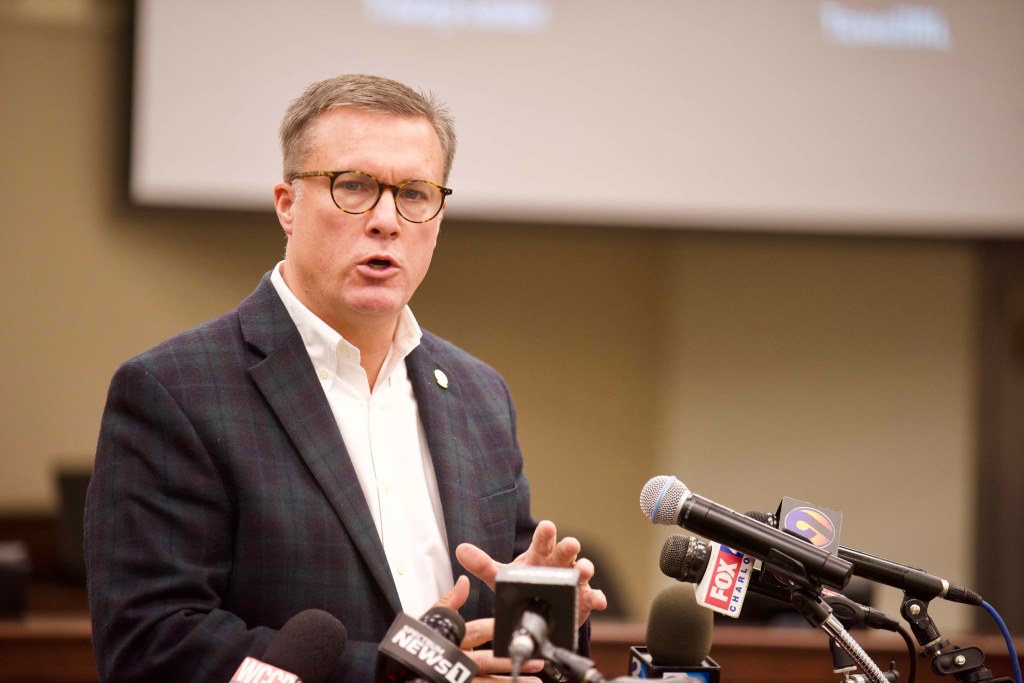 Carl Blankenship/Salisbury Post - Rowan County Board of Commissioners Chair Greg Edds speaking to reporters from Salisbury city hall on Thursday. He implored parents to step up.

SALISBURY — Scrambling to get from his house to Catawba College on Wednesday night, a thought ran through Gemale Black’s mind.

“My first reaction was, ‘Man, here we go again,’” said Black, who’s president of the Salisbury-Rowan NAACP and active in the city’s anti-gun violence efforts.

Black made his way to campus to see if he could help after hearing gunshots erupted at the Dale’s Sporting Goods/Sam Moir Christmas Classic. The longstanding holiday tournament became a crime scene on Wednesday night when gunfire rang out at halftime of the boys semifinal game between West Rowan and North Rowan.

“It’s something we enjoy, something that’s been a longstanding tradition where people come out and enjoy high school boys and girls basketball teams competing against each other, and now we have to deal with another violent crime,” Black said.

Bullets struck two juveniles who were near the fray. A 13-year-old was airlifted to Wake Forest Baptist Medical Center in Winston-Salem, where he was in stable condition Thursday. A 14-year-old male was treated Wednesday night at Rowan Medical Center and released.

Dean Hunter, chair of the Rowan-Salisbury Schools Board of Education, said he was grateful injuries were not what they could have been.

The gunfire at the tournament also sent a crowd of about 400, many of them friends, family and classmates of the athletes competing on the court, running for safety or hunkering in place.

“To the parents and families, I’ve heard from a few in the last 24 hours and I can only imagine what you guys went through and what you as parents and grandparents went through,” Hunter said during a joint press conference held in the Salisbury City Hall Thursday afternoon. “When I thought about it this afternoon, my initial thought was that you shouldn’t have to deal with that.”

“I was absolutely horrified that this could happen in our community,” Alexander said.

Alexander said she can understand if the shooting causes some members of the community to be fearful.

“It would be normal for every human being to be concerned because it’s our young people and families that are attending these events,” Alexander said. “Of course, anytime anything like this happens would be extremely concerning. I don’t need a crystal ball for that.”

“My phone has rung off the hook today with folks who are bothered and scared,” Edds said. “These are things that seem to be happening across the nation and now it’s visited here.”

DeeDee Wright, a member of the Salisbury Police Chief’s Advisory Council, received news about the Wednesday night shooting by way of a phone call.

“My initial response is that another child is lost,” Wright said, “not so much physically but lost in terms of direction, support and how they can best resolve some of the issues that are facing them.”

Salisbury Police Chief Jerry Stokes said the shooting could be a “wake-up call” for the community.