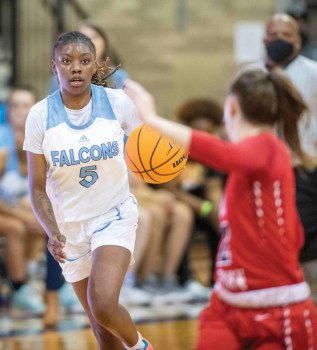 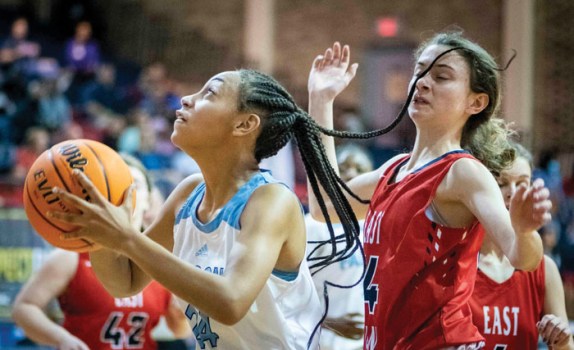 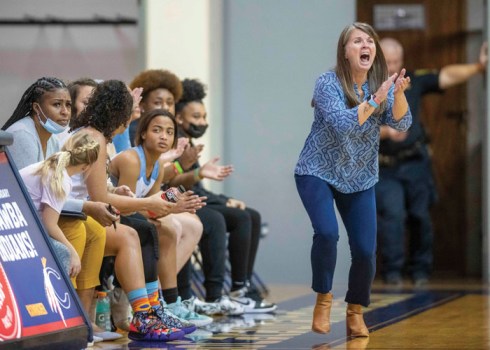 Her youthful West Rowan girls basketball team took a carefully devised game-plan and executed it with perfection at Goodman Gym, lifting the Falcons past East Rowan 72-35 and into today’s Dale’s Sporting Goods/Sam Moir Classic semifinal round.

“I was pleased with the effort,” Poole said after defending champion West (6-2) secured its fourth straight victory and a berth opposite Salisbury Wednesday night. “We did some good things and played hard defensively. On offense, we had a game-plan — attack the basket, pass the ball and find the open shots. They were patient and stuck to it.”

The Falcons received a game-high 24 points from sophomore guard Demya Phifer and a worthy performance from forward Lauren Arnold (17 points, 6 rebounds). They used a 9-0, first-quarter scoring spree to announce their intentions and mount a 16-5 lead. By halftime West’s advantage ballooned to 43-15.

“You’ve got to defend your championship,” Phifer said with a bright, post-game smile. “It’s that simple.”

East (4-5), the tourney’s No. 5 seed, made only 13 field goals while yielding 33. The Mustangs never led, but forged a 3-3 tie when sophomore Hannah Waddell drained a rainbow 3-pointer from the right corner in the game’s second minute.

“We were knocking down shots and working hard at the start,” said Mustangs’ coach Brianna Evans. “Then, I don’t know if we got tired or what, but we stopped making baskets.”

West didn’t. A 20-2 run in the second period pushed the fourth-seeded Falcons into rarified air before a 7-0 spurt in the third bolstered their lead to 56-21. Arnold, a starter who came off the bench on this occasion, converted four shots in the final stanza — first on a 12-foot set shot from the right side,  then on a outback, then on an authoritative dribble-drive and finally on a lay-in from the right block.

“It was a fun game, a great outcome,” Arnold said. “We got on the boards and made shots. That was the idea.”

Poole say West’s defensive brawn made the difference. “We knew they liked to shoot, so we made sure we stayed on the shooters,” she said. “They got one shot — and that’s all they got. One and done.”

She added that Phifer, a backcourt maestro who handles the ball well, was the player crunch time couldn’t contain.

“She played a good game,” Poole offered. “She attacked. We like to get out and run and she led that transition. She’s learned that our defense leads to a lot of our offense.”

Arnold, meanwhile, “played a great game and positioned herself well.”

It added up to a one-sided rout, one that caught Evans a bit surprised.

“We have to look ourselves in the mirror,” she  said. “And do the same things we’ve been doing. Honestly, this game bothered us, but we’ve got another one tomorrow. And with it, a brand new mentality.”

NOTES: Salisbury (8-1), the top-seed, advanced with a 76-23 first-round win over Davie County. The Hornets beat West 59-34 in a non-conference game Dec. 3. Tipoff is scheduled for 6 p.m. … East will face Davie at noon Wednesday in a losers-bracket tussle. … Sophomore Makaylah Tenor made West’s only 3-pointer, a bomb from the right corner with 5:25 remaining in the first quarter. Teammate May Edwards corralled eight rebounds. … Peyton Whicker (11 points) hit three 3-balls for the Mustangs.