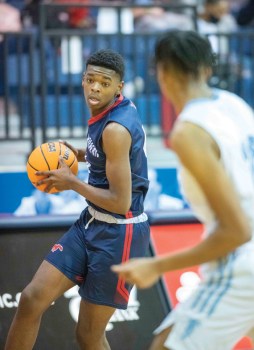 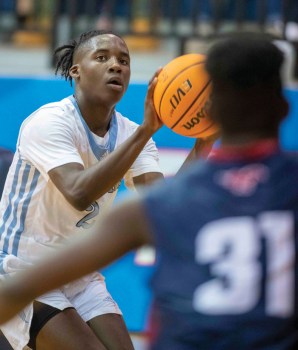 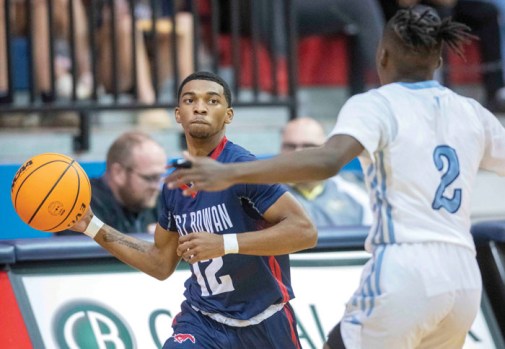 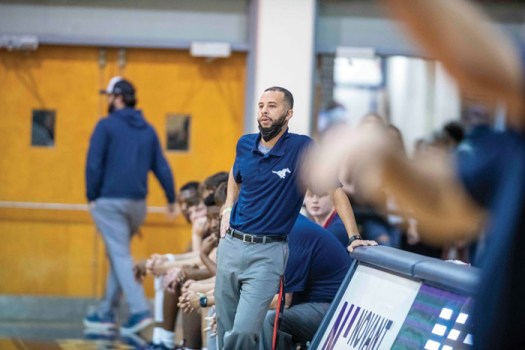 “I think we came in waves all night,” Gurley tried to explain below Goodman Gymnasium, just moments after West brushed aside East Rowan 88-56 in its Dale Sporting Goods/Sam Moir Classic opener. “We don’t necessarily know what’s going to happen from one wave to the other, but we’re gonna keep coming.”

It proved to be an effective strategy for the fourth-seeded Falcons (4-4), who snapped a two-game losing streak and hurdled into Wednesday night’s semifinal against top-seeded North Rowan. West put 14 names in the scorebook and 12 of them scored, paced by the game-high 22 points sophomore William Givens dropped on the overmatched Mustangs (3-7). Junior Athan Gill (11 points) and 6-foot-10 Bryson Cowan (10) joined him in double figures.

“We just came in and played how we know we can play,” said Givens, the six-footer who buried four 3-pointers. “We played as a team and didn’t stop. At the beginning of the game we had all this energy. Then in the middle the pace slowed down, but we reminded ourselves there was still 16 minutes to play. We weren’t going to let this one get away.”

There was little chance of that once the Falcons outpointed East 18-5 over the last five minutes of the first half. Gill’s 3-ball from the right wing launched the flurry and Peter Simpson’s fastbreak layup — off a gorgeous feed from teammate Mario Robinson — capped it, turning a precarious two-point lead into an insurmountable 35-20 halftime advantage.

“For a lot of the first half, we hung in there with them,” losing coach Andrew Porter said after East shot 19-for-65 (29.2 percent) from the field. “But we’re still a young team looking for consistency. We’re up and down. West made a big run and we tried to make one. Those are things we need to work on — consistency and making better runs and understanding that if a team makes a run on us, it’s ok. We can come back and make a run as well.”

If Porter wants to see the big picture, he needs to look no further than 6-6 hi-rise Tee Harris. The do-it-all junior hit seven of 13 field goal attempts, scored a team-best 16 points and snatched 13 rebounds.

“The problem was we weren’t knocking down shots, weren’t playing together, weren’t executing plays,” he beefed. “We need to trust each other. Yeah, we went on some runs. But some people were hitting and some weren’t.”

That hardly tarnished Harris’ effort. “I thought he played as good as he could,” said Porter. “We wanted to get the ball inside to force their defense to collapse. That would have opened up our shooting. We had some success, but our shooters just weren’t hitting tonight. I like that he’s starting to attack the net, though.”

Noticeably absent from the East arsenal was shooting guard Dylan Valley. The junior sniper couldn’t find his stroke, finishing 4-for-20 from the floor and netting 10 of his 13 points in the third quarter. He brought a 15.6 points-per-game average into the match.

“He was trying to find different ways to score,” Porter noted. “Either ball screens or screening the bottom of their zone to get him open. He just couldn’t get many good looks. It was an off-night.”

West padded its lead in the third quarter, when burly Josh Noble grabbed a rebound and hit a stickback, then converted a pair of free throws that put West up 58-38. Gurley emptied his bench in the fourth, when the Falcons used a late 16-4 spree to finish with a purpose.

“It was the first game of the Christmas tournament — and that can go either way,” Gurley said. “There are so many more factors involved than just the talent of the two teams or the coaching staffs. You’ve got a full-house crowd. You’ve got everybody in the county’s eyes on you. We had to deal with a lot of issues. But at the end of the day, we focused on being ready. And I think that carried over for 32 minutes.”

NOTES: North Rowan (7-1) earned a free pass to the semifinals when A.L. Brown withdrew for medical reasons. Gametime is 7:30 p.m. …  East will next play the winner of Wednesday’s Carson-South Rowan consolation game at 1:30 p.m. Thursday. … The Mustangs finished with six 3-pointers, including a pair by Valley. … The other semifinal pits Salisbury (5-3) against Davie County (7-3) at 4:30 p.m.