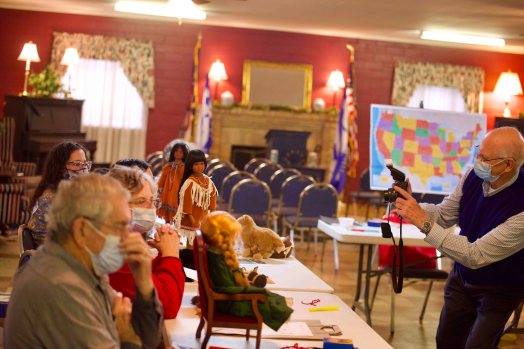 Carl Blankenship/Salisbury Post - At the close of the event there was a giveaway of dolls and accessories before attendees were invited to see the museum. 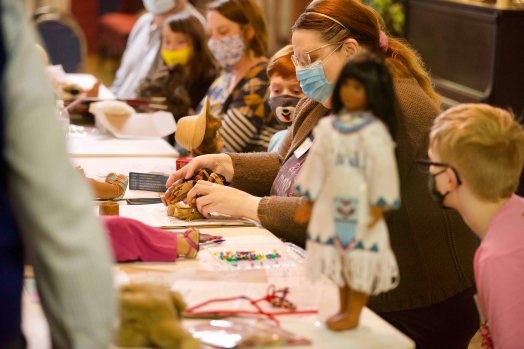 Carl Blankenship/Salisbury Post - Linda Levine looking at some of the items from the giveaway at the end of the program. Attendees were given dolls and accessories. 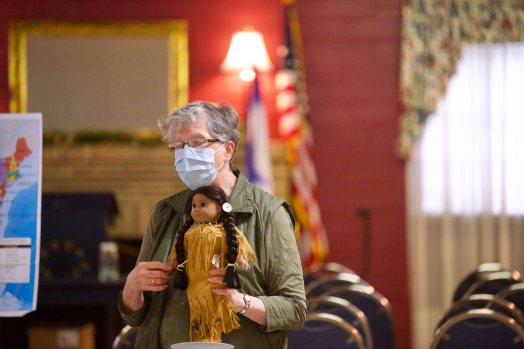 Carl Blankenship/Salisbury Post - Museum Vice President Kathy Gregg holding Kaya. This was the first in-person event the museum has hosted since the COVID-19 pandemic began in 2020. 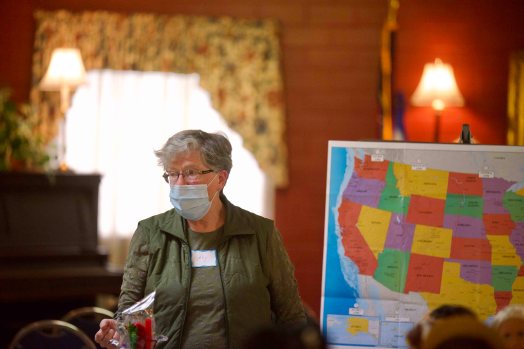 Carl Blankenship/Salisbury Post - Kathy Gregg explained where the Nez Perce are from and some of the practices described in books about Kaya and her accessories.

SPENCER — Kaya is a unique character for the American Girl collection.

The doll is a historical composite of a society in a period before the United States of America was even an idea. Kaya is representative of the Nez Perce, an indigenous people who have lived in the Pacific Northwest for more than 11,000 years ago. Now, she’s found a home at the N.C. Museum of Dolls and Toys in Spencer.

The new display on Kaya, with all her accessories, was donated by Arlette Ballew, who moved to Salisbury in 2018 and first visited the museum in 2019. She was taken by the museum’s collection and decided to make a Kaya display a reality. She said it was a charitable and enjoyable endeavor. Though, none of the pieces for the display were accidental or convenient finds.

“Every bit of it was a search,” Ballew said.

She foraged through online marketplaces, thrift shops and more to assemble the collection. On Wednesday, the display was presented to a group as part of a junior collectors event, the first in-person event the museum has held since the beginning of the COVID-19 pandemic.

Ballew said she was interested in American Girl Dolls for her nieces and grand nieces. She liked the wholesome message of the dolls and the research that goes into them. The museum did not have any on display. So, she decided to take it on as a project.

“I read ahead of time that American Girl had done laudable research,” Ballew said, noting the development of the doll involved consulting with multiple Native American tribes and trying to make the character historically appropriate.

Museum Board Vice President Kathy Gregg ran Wednesday’s program. She talked to the small group gathered at the Spencer Women’s Club about the Nez Perce, Kaya’s character and all her accessories.

With a map of the country at the front of the room, Gregg spoke about where the Nez Perce are from and the historic practices of the society, including caring for and working alongside animals.

Attendees made bracelets, ate food inspired by the traditional Nez Perce cuisine and learned about Kaya’s spirit animals. There are also books on Kaya.

“I’m a retired teacher so I naturally gravitate toward these kind of events,” Gregg said, adding she tries to look for things with historic value all of American Girl’s initial characters were well-developed.

Museum Director Beth Nance said it is typical for a high level of detail to go into the background of each American Girl doll, and events like Wednesday’s are good educational opportunities and a way to explore other cultures. She noted adults attend the programs as well.

“It’s a good wholesome activity and they’re going to take something away at the end of the day,” Nance said.

Linda Levine came to the event from Raleigh with her two nephews. They love American Girl and were raised with doll collectors. It was part of an overnight trip to visit the American Girl store in Charlotte as well.

The presentation was all new to her because American Girl is not her wheelhouse as a collector.

“It’s nice to see kids getting more into the hobby,” Levine said. “That’s an important part for a lot of us doll collectors.”