Skateboarding Santa gives away hundreds of boards on Christmas Eve 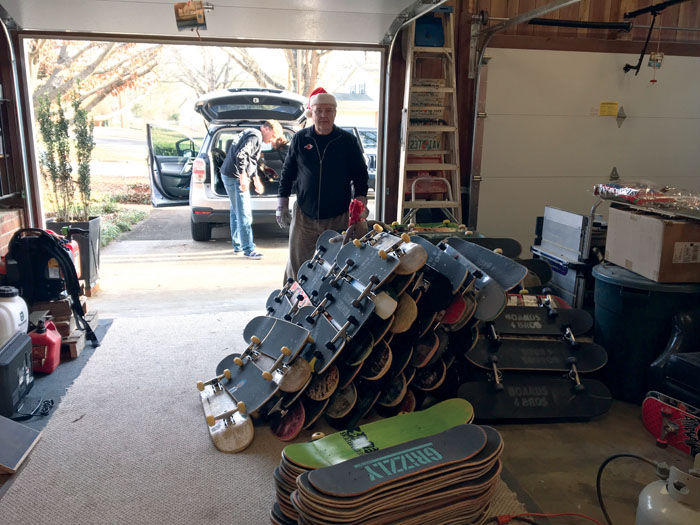 Ed Womble's garage turns into a makeshift skateshop as he and other prepare boards to give away. Photo submitted.

SALISBURY — Santa brought the gift of stoke this Christmas.

Donning a red suit and doing his best Kris Kringle impression, Ed Womble drove through Salisbury on Christmas Eve. Instead of a sleigh full of wrapped presents, he drove a Camry filled with skateboards.

Pulling into a neighborhood in south Salisbury, Womble saw a group of people hanging out outside of a home. One of the men got especially excited to see him arrive.

“We pull up and his kids are outside and I asked if they’d like some skateboards,” Womble said. “He goes, ‘I’ve waited 40 years for Santa to give me a skateboard and now he drives up in a Camry.’ I told him, ‘Yup, I don’t have a big sled today but I’ve got a skateboard that’ll fit you.’ We hopped out and hooked them up.”

Womble is the co-founder and North Carolina ambassador for Boards for Bros, a nonprofit organization based in Tampa, Florida, dedicated to distributing refurbished skateboards to people who might not be able to afford their own.

“We call it ‘spreading stoke,’” Womble said. “We hope that children will learn the life lesson that when you’re learning to do something, you might fall down, but you have to get back up and try again. Also, it’s exercise. It’s fun.”

“Stoke” is a common skateboard term that means excitement or enthusiasm.

Womble, who was born in Winston-Salem and spent his early years in North Carolina, fell in love with skateboarding as a teen in Clearwater, Florida. He decided to attend the University of Florida not for its academic or athletic prowess, but because the school boasted one of the best skateparks on the east coast and a skating community to match. During his time as a Gator, Womble even competed in skateboarding on a professional level.

After graduation, Womble kept in touch with many of his skateboarding buddies.

“I didn’t join a fraternity, but as it turns out, after the internet came out and we started to get in touch with each other, we were in a fraternity,” Womble said. “It’s a fraternity of people who love to do something that’s exercise, fun, competitive, brand new and innovative.”

They’d meet to skate together from time to time. During a reunion at the Skatepark of Tampa in 2006 around Christmas, Womble and other skaters decided to give away boards to children living near the park who couldn’t afford their own.

“It was hot and I rented a Santa suit and it was muggy and it was crazy,” Womble said. “We got there and it was a mob scene, but we had enough for everybody. It was amazing. I got back in the car and looked at (my friend) and said, ‘Dude, we have to do this again.’”

The one-time philanthropic deed became a legitimate 501(c)(3) nonprofit. While it is based in Tampa, the organization now maintains chapters in New Jersey, New York and California. After moving to Salisbury about a half decade ago, Womble started the North Carolina chapter.

Even though he’s “not much of a skateboarder” anymore, Womble spends a significant amount of his free time collecting and repairing boards. He has a drop off location for donated boards at Black Sheep Skate Shop in Charlotte, but they tend to come to him in other ways, too. Sometimes, it’s a single person donating an old board. Other times, it’s one person donating dozens of boards. One lady from Raleigh with two skateboarding sons donated more than 50 boards to the cause this year.

Womble stashes the boards in his garage, which doubles as a cluttered skateshop. If a donated board is in good enough shape, Womble will re-home it without much work besides branding “Boards for Bros” on the griptape. Other boards need more attention, including the replacement of hardware like trucks and wheels. Boards for Bros has relationships with major skateboard companies to buy hardware for a low price and also relies on monetary donations to purchase what else is needed.

Womble works on the boards during spare hours throughout the year, but a big “team build” happens closer to Christmas as the workload picks up. A group of volunteers, most of them skateboarders from the Charlotte region, pitch in every year. It’s typically a mad dash to get all the boards ready by Christmas eve.

The work is worth it, Womble said, when he sees children react to getting a skateboard all their own for free.

“The most fun is giving them away and that gratification of spreading stoke,” Womble said.

Womble chooses low-income areas of town to visit. Apartment complexes where there are many kids and some open areas to skate are best, he said.

A few years ago, Womble purchased a Santa Claus suit of his own that he wears every year during deliveries. Not only do the kids love it, but it helps strangers feel comfortable with him showing up in their neighborhoods unannounced.

“When you pop out of the car and you’re wearing a Santa suit and Christmas is tomorrow, there’s free stuff somewhere,” Womble said. “It tells the story right off the bat.”

Since helping start the organization 15 years ago, Womble has given away more than 1,000 boards. He added to that total this year by distributing over 200 boards to locals. While Womble doesn’t expect every kid who receives a board to become a professional skateboarder, he hopes that he’s doing some good for the community.

“I don’t have any proof that I’ve changed any lives, but hopefully I have a little bit,” Womble said.

Womble is satisfied with playing skateboard-delivering Santa on Christmas Eve, but he also has plans to push for the creation of a skatepark in Salisbury.

“I think we should support the sport and that if we had a nice park, it would be another reason for people to drive another 10 minutes past Kannapolis and Concord and buy a house in Salisbury,” Womble said. “I think that we have this great opportunity. Why not make it part of the assets of the community?”

Fore more information about Boards for Bros or to donate a used board, visit boards4bros.org or email info@boardsforbros.org.