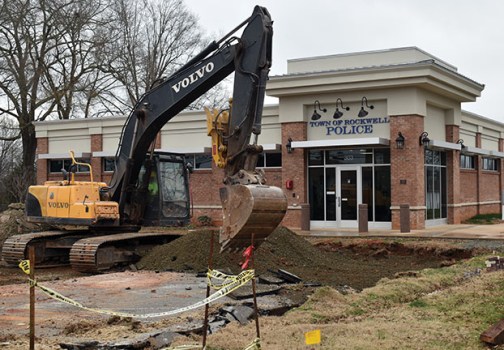 The Rockwell Police Department moved into its new building in October. Once the move was complete, the old building was demolished to make room for a new parking lot. Ben Stansell/Salisbury Post 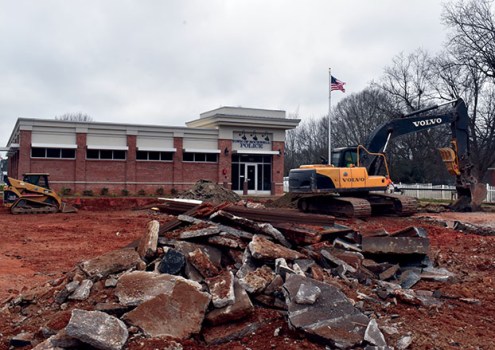 The new Rockwell Police Department building overlooks the site of the former building, which has been reduced to rubble. The site will be turned into a parking lot for the new building. Ben Stansell/Salisbury Post

ROCKWELL — Standing behind piles of rubble and construction equipment just off Highway 52 is the brand new Rockwell Police Department.

Although the parking lot is still under construction, the building itself was finished in October and is open to the public. Rockwell Police Chief Hugh Bost Jr. described the station, built just a few feet behind the now demolished former law enforcement building at 303 W. Main St., as a “breath of fresh air” for the department and town.

The town decided to build a new police station after discovering that water damage had rendered the old building uninsurable. The former station, named the Jim L. Bost Law Enforcement Center, was prone to flooding due to its disadvantageous position of being a few feet below Highway 52. Every time a heavy rain came, a few inches of rain would run off of the busy street and into the front door. Not even silicone plugs could stop the water and officers often resorted to mops to clean up the mess.

The new building is about two feet above Highway 52 and set back from the street.

The department had also outgrown the old building, which was constructed almost a century ago and had previously been home to a sporting goods store, an automotive repair shop and a laundromat.

In the new station, the department has more room for evidence and an entire classroom dedicated to training. The station has about 30% more floor space than the previous building and is laid out more efficiently, Bost said. The building houses the department’s seven full-time and eight reserve officers. It also hosts a satellite office for the Rowan County Sheriff’s Office.

Construction on the building started at the end of September last year. Progress was slowed by heavy showers in the winter and by general supply-chain issues. As a result, the project is about four months behind schedule.

“We had a little problem with weather when they started putting in the foundation and footings for the structure,” Bost said. “That held us up and they got some water and they had to go in and get that re-graded and dried out. Then, after doing that we had some delivery times pushed back.”

The department is still waiting for springs to be delivered so that it can operate the station’s garage doors properly, Bost said.

Despite the delays and high costs of building materials, Bost said the project will come in under its initial $1.45 million budget thanks to the town’s contingency allocation. To finance the project, Rockwell received a loan from F&M Bank that it will pay back over 20 years. The town also used available cash to pay for services and fees related to construction.

Police officers started moving into the building two days before Halloween. The first day was reserved for transferring important internet and telecommunications equipment. The department moved the remainder of the furniture, evidence and other equipment to the new building over the next month.

Demolition of the old building started in early December.

Now that the former station has been removed, contractors are working to put in a parking lot and landscaping for the new building. The public lot will have about 11 spaces and will enhance traffic flow by allowing visitors to exit the building via South Cherry Street instead of having to reverse onto Highway 52.

“We’ll eliminate the traffic hazard problem of backing out into Highway 52, which for many years has caused a few near misses and a couple uh-ohs,” Bost said.

Bost expects the parking lot to be finished within six weeks, but worries that rainy winter weather might delay the project. Once the lot is finished, Bost said the department plans on hosting a dedication ceremony or an open house to show off the new building.

Until the parking lot is complete, Bost said visitors can park behind the building and walk around to the front entrance.