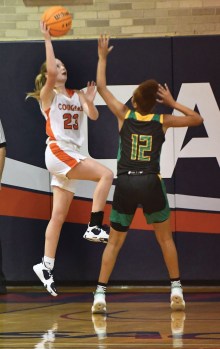 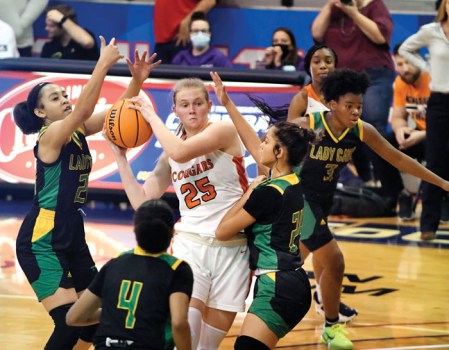 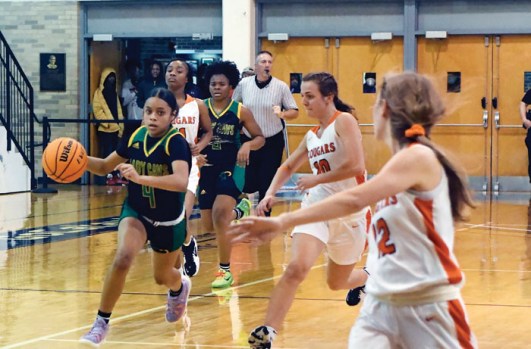 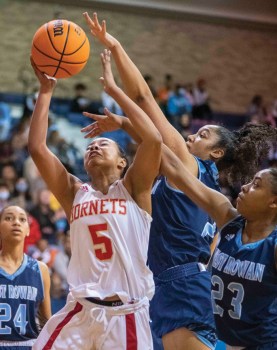 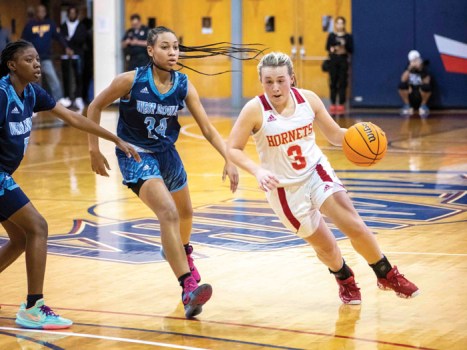 Salisbury's Rachel McCullough led the Hornets to a girls basketball victory over West Rowan 54-36 in the semifinals of the Sam Moir Christmas Classic. . JON C LAKEY / FOR THE SALISBURY POST. 12/29/21, Salisbury,NC.

Top-seeded Salisbury won a 54-36 grinder against fourth-seeded West Rowan, while second-seeded Carson shot sizzling percentages and outscored North Rowan 68-53 in a game that was a lot more exciting than that final score looks. The third-seeded Cavaliers had the lead in the second half.

Salisbury (9-1) was scheduled to play Carson (9-2) for the championship tonight at Catawba College’s Goodman Gym, while West (6-3) and North (7-3) were to meet in a third-place game. Those games were called off

Salisbury has enjoyed tremendous success in recent seasons. Seniors Rachel McCullough and Jaleiah Gibson, four-year varsity players, are 77-10 for their careers, but they have yet to embrace a Christmas tournament trophy. Carson won when they were freshmen. West won when they were sophomores. COVID won their junior year.

“That’s why winning it this year would mean so much, especially after not getting to play the tournament last year,” McCullough said. “As seniors, you start seeing the basketball days counting down. This is the last time for this or the last time we’ll get to do that. This is our last Christmas tournament. It’s our last chance.”

Salisbury played a tough, purposeful semifinal, dragging a fast-paced West team that wants to sprint into a fierce halfcourt crawl.

“West has really good players, and I can’t downplay their players,” Gibson said. “But we played a mature game, a smart game. Our coaches gave us a game plan and we stuck to that plan. We played our game.”

Phifer has averaged 19 points against everyone except Salisbury. She scored two against Salisbury in the Hornets’ 59-34 win at West and she had two on Wednesday. Salisbury’s rangy forward Jamecia Huntley led the defensive effort to contain Phifer.

West got very few chances to run, got few layups and got few second-chance points, especially in a frustrating second half when the Hornets’ older, bigger bodies wore them down.

“West is at their best going full-speed,” Brice said. “We can play fast, but we’ve got experienced players and we can play the halfcourt game when we want to and need to.”

Mya Edwards had a strong start for West. Her six points in the first quarter kept the Falcons close. Salisbury led 9-8 after a quarter.

“We start slow for some reason,” Gibson said. “We missed a lot of easy shots early in the game, but once we settle in and get comfortable, we make those shots in the second half.”

Lauren Arnold had three buckets in the second quarter for West, but Salisbury achieved some separation. McCullough made a 3-pointer, Kiki Walker banked in a 3-pointer, and Huntley had a driving and-one to put the Hornets ahead 24-14 two minutes before halftime. The Hornets led 28-19 at the break.

The other key sequence came for the Hornets in the third quarter. They were only up nine when Icecis Nwafor scored off an inbounds play and Kyla Bryant and McCullough followed with layups for a 6-0 mini-run and a 42-27 lead. A 15-point deficit against the Hornets feels like 25 because it’s just really hard to score against them and virtually impossible to put a run together.

“We rebounded the ball better than we did the first time we played them,” Brice said. “That first game, West was scrapping for a lot of offensive rebounds. But tonight we usually limited them to one shot, and it was usually one tough shot.”

McCullough led the Hornets with 15 points. It was an unusual night for her with only one 3-pointer, two free throws and five two-point buckets.

“A lot of teams face-guard me, so I’ve mixed thing up more with layups and drives,” McCullough said. “If they take away the 3, I can score in other ways.”

McCullough has 933 career points, as she continues to make consistent progress on the four-year journey to the 1,000 milestone.

Bryant only scored nine, low for her, but she controlled the ball and the game when Salisbury operated its delay game for the final three minutes or so.

“She did what we needed her to do,” Brice said.

Makaylah Tenor scored 10 to lead the Falcons. Arnold had nine.

The game ended with some words being exchanged and players shoving as the teams were headed to the locker rooms.

SALISBURY — Carson shot 70 percent from the field in the first half and 57 percent for the game and still had a tussle on its hands against the Cavaliers.

“North Rowan is good and it was tough for both teams to play each other for the third time in such a short span,” Carson head coach Brooke Stouder said. “They know us and we know them.”

Carson has won all three meetings, although this was the scariest one for the Cougars.

Bailee Goodlett, who had four assists and six steals, scored 23 for the Cavaliers, mostly with drives. Hannah Wilkerson had 14 points, four steals and five assists, while Brittany Ellis got 12 points, mostly with a hot streak in the third quarter that temporarily turned the game around.

Mary Spry had 23 points on 8-for-13 shooting, 13 rebounds and several blocks for Carson. Hannah Isley scored 19, including 3-for-3 on 3-pointers. Aliayah White was huge with 15, while Makayla Johnson made some tough shots for nine.

Goodlett and Wilkerson kept Carson in the game in the first half, but Carson shot so well it led 35-26 at halftime.

Then Ellis got really hot to start the second half. She hit three straight 3-pointers from the left corner and forced Carson out of its zone and into a man-to-man defense.

“We weren’t getting out on her, and she made three big shots,” Stouder said.

North briefly took the lead at 38-37 on a jumper by Bloom Goodlett, Bailee’s twin sister, with a little over three minutes left in the third quarter.

“We had a terrible start to that quarter to go from a nice lead to being down, but I liked the way we responded to the challenge,” Stouder said.

Whenever Carson needed a bucket it got one from Spry — or Isley — or White.

“I had a height advantage, so I was always the first look,” Spry said. “My teammates did a great job of getting me the ball, and even after the took the lead, we stayed calm. We didn’t get our heads down.”

With Carson clinging to a 43-40 lead, Isley made a humongous play late in the third quarter. Spry missed a 3-pointer, but Isley kept the rebound alive and Carson was awarded the ball out of bounds. Then Isley swished one of her 3-pointers for 46-40. Second-chance points don’t come any bigger than that shot.

Isley also had the defensive assignment on Wilkerson in a matchup of Hannahs. You’re not going to stop Wilkerson, but Isley made her work hard for 14. Basically, Isley tried to take away the jumper and Spry was tough to shoot over if Wilkerson drove.

With Carson leading 56-50 midway through the fourth quarter, White made a three-point play off an offensive rebound to push the lead to nine. A paper-thin North squad was exhausted by then, and the Cougars pulled away from there with deadly foul shooting.

“Our girls played their hearts out and gave everything they had,” North head coach Anthia Smith said. “They’re playing without rest, but they’ve never not been ready to play.  We played hard, but credit Carson. They’re fundamental and they’re good.”