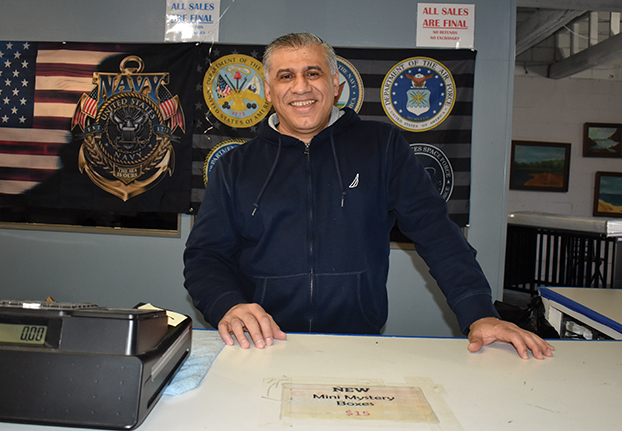 Oscar Urbina opened G.A.U. Liquidators because he saw a market for a bin store in Salisbury. The store sells products returned by customers to online sellers like Amazon for a discounted price. Ben Stansell/Salisbury Post

SALISBURY — An experienced thrifter with a keen eye, Yolanda Byrd felt like she struck gold when she walked into G.A.U. Liquidators for the first time in summer 2020.

Byrd stopped at the South Main Street store in search of nothing in particular, but she walked out with a few valuable items, including a Galaxy smartphone.

G.A.U. Liquidators is what many refer to as a “bargain bin store.” The shop sells items that have been returned by customers to big box retailers as well as Amazon. Those items are purchased by the pallet or truckload at an auction or through a liquidation company and are dumped in long plywood bins for customers to sort through.

Bin stores have been increasing in abundance in the United States and Canada in recent years, largely fueled by Amazon’s rise and the high percentage of items returned on the site. Oscar Urbina said he opened G.A.U. Liquidators in July 2020 because he saw a need for a liquidation store in Salisbury.

Urbina opened the store after working as a chef in America for many years. He came to the United States about three decades ago from Nicaragua, dissatisfied with the way the Central American country was being run.

The draw for the customer is that items inside the bins at G.A.U. Liquidators are sold for one standard price, depending on the day of the week. When new merchandise is placed in the bins on Friday, each item costs $10. The price decreases each day until Thursday, when items are just $1. The pricing gives customers a chance to score on products that are worth more than their bin price.

But not every shopper will stumble across a major steal. It all depends on the day and what happens to be in the bins. Merchandise can range from calendars to toys to holiday decorations. Byrd said her friend discovered pieces to a 3-D printer in the bins.

While some of the items in the bins are devoid of packaging, others are in the same boxes they were returned to the original seller. This means there can be some ambiguity about what customers might be buying.

Urbina allows customers to open the boxes in the store to see what’s inside, but they must do so at the front counter under his watch. He also gives customers the opportunity to test tech products to ensure they work. If a product is broken, he’ll remove it from the bins.

Some higher priced items, including crockpots, speakers, projectors and ring door cameras, have been removed from the bins and priced accordingly on shelves in the store. There are also racks of clothing and shoes available for purchase.

Due to opening during the pandemic and the relative newness of the business model, Urbina said the store was slow to attract customers at first. That changed with the help of Byrd, who helped bolster the store’s online presence through Facebook and curated TikTok videos.

Byrd, who runs her own custom T-shirt business, said she likes to support other minority entrepreneurs.

“I’m really into minority businesses thriving and Salisbury does not have a good track record for it in terms of long-term sustainability and revenue generation,” Byrd said.

Urbina runs G.A.U. Liquidators with the help of just one other employee and Byrd, although she’s not paid for her marketing assistance.

With Byrd’s help, Urbina said sales have increased by 80% since he initially opened. Byrd visits the store multiple times a week, both to shop for herself and make social media posts. She was there on Christmas Eve, when she said there were more people in the store than she’d ever seen before. Not only was it the day before America’s favorite gift-giving holiday, but it was also a Friday, which is when the best items are put in the bins.

Urbina said the store is the realization of a dream and that the store has big hopes for the future.